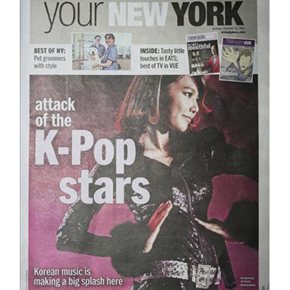 We’ve all seen that kpop is beginning to hit the mass media in the UK, first on the BBC News website and then more recently in the Evening Standard. Well it seems that across the pond, it seems to be happening as well with SNSD being featured on the front cover of a New York publication, “New York Daily News”

A spokesperson from SM Entertainment said, on the 24th Oct, “A photo of SNSD was published on the first page of New York Daily News on October 23rd (local time). The accompanying headline was ‘Attack of the K-Pop Stars’, with the central focus being SM Town Live World Tour and an interview with SNSD’s Tiffany.” 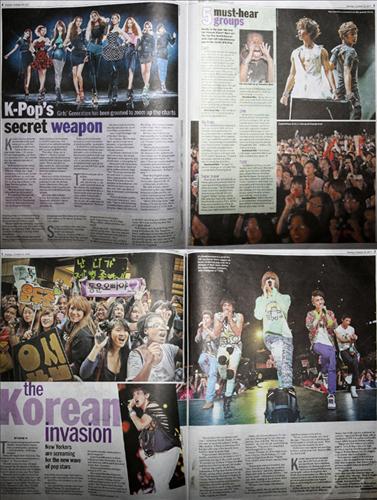 The article in the “New York Daily News” stated: “The Hallyu phenomenon is already visible in France, Brazil, Germany and Australia; New York is now opening its doors for it. On the evening of October 23rd SM Entertainment, one of the largest labels in Korea, held a sell-out concert in Madison Square.”

The article goes on to mention SNSD’s achievements on the Japanese music market and further introduced the top five Korean groups to watch out for.

This is another milestone for kpop in the wider western music industry, although there has been some tries before, namely BOA a few years ago. Universal Music International representatives commented on the success of SNSD saying: “SNSD is a very impressive artist. Both their choreography and songs are extremely strong. It’s their era right now. Their first single “The Boys” reached fifty-two placing on iTunes without any promotion.”

There was also commented made by Vice-president Steve Berman of Interscope Records saying that SM Town last concert was made up of at least 75% non-asian proving the potential of kpop in the mass market.