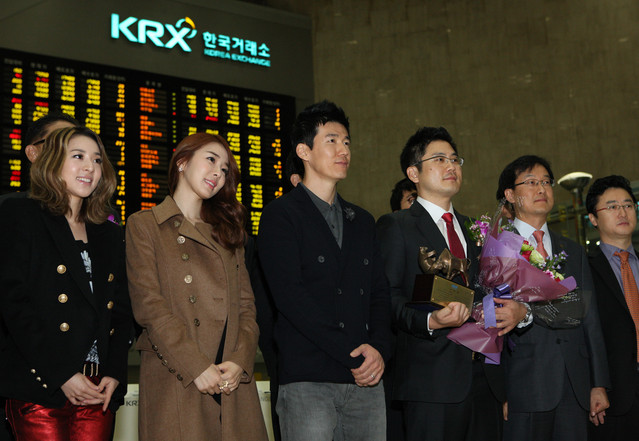 On November 23rd YG Entertainment listed its first shares on the Kosdaq, South Korea’s junior stock market and on the first day of trading alone its per-share value increased to over double, growing from 34,000 (£18.89 GBP) to 78,200 won (£43.35 GBP). Chairman and founder of YGE Yang Hyun Suk holds an estimated 47.7 percent of the company in stocks(£90,496,560 GBP), ranking him second highest valued person in the Korean  entertainment industry after Lee Soo Man of SM Entertainment, valued at (£142,208,880 GBP).

YGE was founded in 1998, Kpop biggest names such as Big Bang and 2ne1 are among the many artists they manage, last year they made over £48 million and are expected surpass £64 million in 2012. There strong start in the stock market follows competitors S.M Entertainment Co and JYP Entertainment with big artists such as Super junior, SNSD (SM town) and Miss A, 2PM (JYP).  Both labels have tripled their shares this year due to the increasing popularity of Kpop overseas.  Kwon Yoon Gu, an analyst at Dongbu Securities Co quoted;

“Entertainment stocks are of hot interest among investors amid this K-pop boom, the IPO prices look cheap, and I think the stock is set to gain especially given that the company is preparing to more actively tap the Japanese market.”

Despite YGE’s scandals this year involving Kpop band Big Bang investors show strong interest in the share sales, market officials are confident that YGE shares will increase to an estimated 80,000 won (£44.46 GBP).  But they may not see substantial increase short term due to their dependence on Big Bang, who currently account for more than half of their total sales.

As a former member of iconic 90’s South Korean band Seo Tajii and boys, Chairman Yang Hyun Suk plans to further expand YGE by using earnings from share sales to increase its pool of new artist, add production staff and opening offices abroad. Kpop has become a key way for South Korea’s government to increase and promote its culture overseas, becoming popular in places such as Japan, China and other parts of Asia. Although they are yet to fully break European and US markets, this year Kpop left its mark on Europe as  popular group Big Bang won an award this month at the Europe Music Awards, thus showing  a sign of growing confidence within the industry.

YG’s stock market announcement also featured on BBC news channels in the UK. Check out the link below;

SNSD to become mentors to teens on new TV show