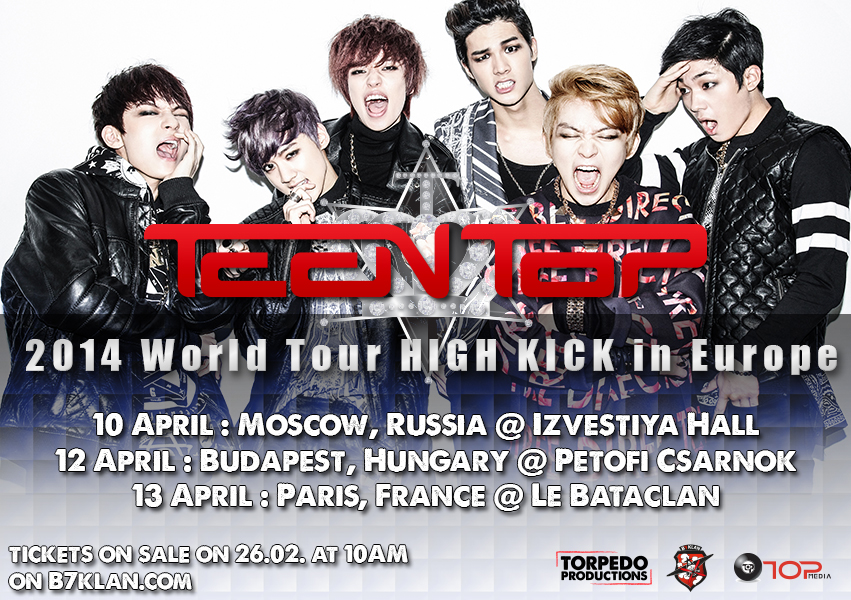 Teen Top have  released a video message for their European Fans for their World Tour in 2014.  Check it out!

On March 23rd, TeenTop announced that they are heading back to Europe for their High Kick World Tour this 2014! They are set to kick off their European Tour in Moscow, Russia to Budapest , Hungary and finish in Paris, France having sold out all their European dates in under a week! Starting in Seoul , They are soon to be heading over to the US to play New York , San Jose , Los Angeles and Toronto (Canada) this March. The six member boy band played several amazing shows in London , Munich , Dortmund , Paris and Barcelona for their European Tour last February and are now returning to show Europe us amazing performances and powerful stages for the international fans that await them.

Here are the event details.

Keep updates with more news and information with kpopconcerts!
[ad#GA-468-img-sumi][ad#GA-468-tx-sumi]

B.A.P announce France and Germany for their 'Live on Earth' World Tour 2014 (More dates to be added)