An idol group, EXO, became a hot potato of the day all of a sudden. The incident began with a single post on internet community. Few days ago, a netizen, whom defined herself as a huge fan of EXO, started off a signature paper requesting military exemption for members of EXO. She said, “Please help out EXO to get military exemption! Few other men can serve in the army little longer for EXO and think it as going to a camp for a longer period. I am currently taking signatures on EXO’s fan-page, please stop by and help out.”

Few other fans are supporting this idea and they spread the rumor saying, “It is true, we cannot send our precious members to the army. If you search for ‘EXO Military Exception’ on search engine, you will find the campaign. We already have over 460,000 signatures, keep up the good work!”

Other people, non EXO fans, are criticizing on this campaign; especially men are expressing anger over their idea.

According to the law, all Korean men must serve in the military service for 21 months unless they have special reason. EXO is formed with 12 members from Korea and China; therefore in order to discharge their duty as a Korean citizen, six Korean members will have to serve in the army in the future.

Military Manpower Administration of Korea heard of this news and told Donga Daily, “It may be the opinion of minority, but it’s very wrong to think that one may be exempt from his responsibility because of other’s request. If one throws a signature campaign for other’s military exemption, it may be considered as putting pressure on and can possibly face judicial action.”

We can understand fans’ love towards celebrity, however wrong expression might end with bad result. EXO has never mentioned anything regarding their duty, but they are being criticized because of one’s unilateral action. 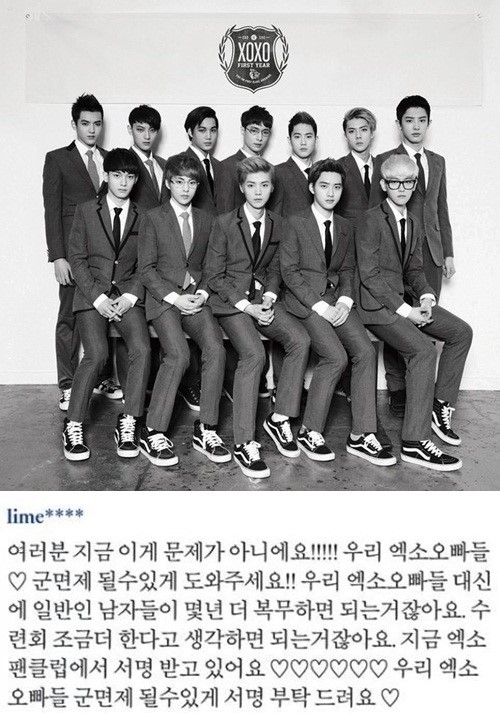