EBS will host ‘The 1st K-Story Pop Contest’ on November 8th, 2013. The purpose of the contest is to find new genre of music that collaborates k-pop and Korean culture.

‘K-Story Pop’ used story and people in the history, and Korean traditional culture as subject matter. By using k-pop, the leading role of Korean wave, as the material, Korean culture will be naturally spread into the world. This will also be a great chance to teach history to Korean youths as well.

In the contest, audiences will be able to see great collaboration of traditional stories such as “ChunHyang”, “New HeungBoo Story”, and “Taoist fairy and Lumberjack” and music.

JoonBum Kim, a first person planned the contest, said, “Drama to K-pop and again to K-Culture. I focused on K-Story when I predicted in need of new Korean wave in order to bring out 3.0 generation of Hanryu (Korean Wave). K-Story is the background of all culture contents; drama, movie, music, musical, game, ballet, opera, etc. and it’s also most competitive edge of Hanryu. It will also be the perfect content to expand world’s interest on k-pop to Korean culture.”

EBS will plan out a musical based on the song that wins the first place in the contest, and will help the musical team to join Korean Cultural Center’s global tour.

‘The 1st K-Story Pop Contest’ will hold place on November 8th, and will also be on-air on November 16th. 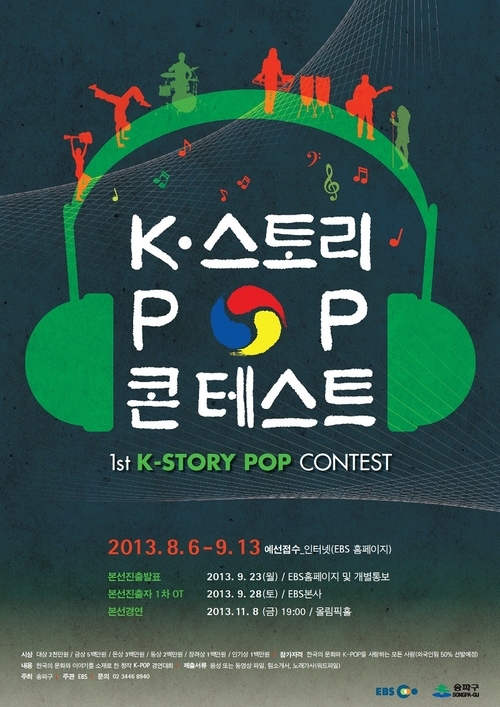