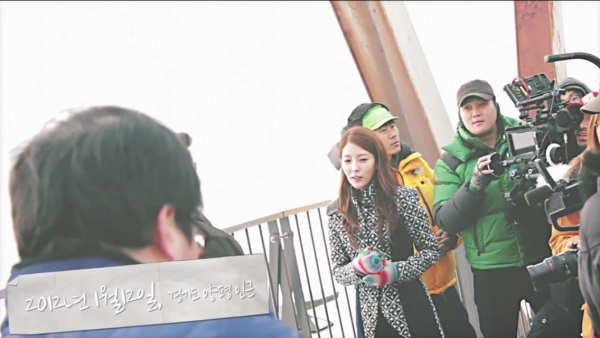 On February 2nd, SM Entertainment released the behind the scene making of BoA’s ‘Disturbance’ music video.

‘Disturbance’ was released on January 28 and received much attention not only for BoA’s powerful vocals, but also for her and Taemin’s scenes in the music video. Taemin was featured in the music video as BoA’s boyfriend and had numerous couple scenes with BoA. From back hugging and cuddling on the couch to kissing BoA on the cheek, the two seemed pretty comfortable with each other.

But the two still had their awkward moments as seen in the MV Making. The video primarily features BoA and Taemin’s NG cuts (bloopers) and playfulness during the filming. A few scenes had them stare at each other intently, which caused one or the other to laugh and forced them to redo the scene countless of times. As for the kissing scene, it started off fine with Taemin going almost nose-to-nose with BoA and slams his fist into the wall. But then embarrassment takes over and Taemin bursts out laughing while the producer and staff tease him.

The music video, directed by BoA’s brother Kwon Soon Wook, came out well despite being filmed in such a short amount of time. The filming began at 8AM with the /living room scenes. At 2PM, the crew traveled to film the bridge scenes in the chilly afternoon. At 7PM, they continued to film the indoor scenes and finally wrapped up the filming and end of the video shortly after midnight. Even with the tight schedule, the outcome of the music video for ‘Disturbance’ was well done and captured the heartache depicted in the song.

Check out the MV Making below!