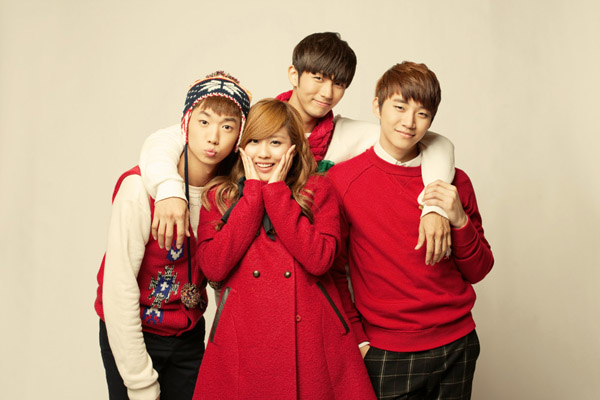 Christmas only comes round once every year and it’s a time when everyone enjoys giving and receiving presents.

But what do you when you’re stumped for ideas?

Quite a few albums have been released these past few weeks, or are due to be released and we believe that these would make great stocking fillers. Brown Eyed Girl’s hit album Sixth Sense came out a while ago but it has been quite popular so I’m sure any BEG fan would be more than please to find this under their Christmas tree ^^

SM Entertainment recently announced that they were going to release their first Winter Album in 4 years. The Warmest Gift is due for release on the 13th December and from what I have seen, fans can’t wait to get their hands on the album, especially after the long winter album hiatus. Any SM fan would love this present and it is also the first Winter Album that SHINee and f(x) are going to take part in, making it even more special for Shawols and Aff(x)tion’s.

SHINee’s first full Japanese album, the First, was released just a few days ago, on the 7th. It has been an album that fans have been eagerly waiting for but it is slightly expensive, at around £30. I know I’d be one happy Shawol if someone got me that as my Christmas present 😛

One of the current hottest new releases is Trouble Maker, the self-titled debut album by 4Minute’s Hyuna and BEAST’s Hyunseung’s project group. The album, especially its title track, has been receiving a lot of attention since the release for the catchy melody and beat but the album also features nice relaxing ballads. In my opinion, this is a great mix of genres.

There have been many other releases recently, such as Happy Pledis’s album featuring Son Dam Bi and After School, and also cute rookie group Boyfriend’s 3rd single, I’ll Be There.

Other than albums, the 2012 Calendars have been released! You can find an official 2012 for any artist and it would be a great Christmas present. It’s practical and very useful for next year and I’m sure that the receiver will use the calendar a lot more often if they have their favourite idol stars on it. And who knows? It might make them a more organised person, if they’re not already ^^

SHINee Happy Holiday sweaters are also gaining a lot of popularity. Despite being high in price, the jumpers vary in design and colour for each member, which allows fans to purchase specific types depending on their bias. Or they could buy all 5 too ^^

There are other brand clothes that idols have been promoting as well as copies of items of clothing or accessories that idols have previously worn, and these are awesome presents, especially for hardcore fans.

We also conducted a poll with our staff members about which present, out of those listed above, they would want to receive. The results showed that there was a three way tie for first place with SMTOWN’s The Warmest Gift Album, Trouble Maker and Idol calendars, with Idol accessories in second place.

These are just a few suggestions of some great Christmas presents but there are many others so we recommend that you have a look around, in different places or on different websites as the range is huge.

And finally, Merry Christmas from all the members of staff here at kpopconcerts.com ^^