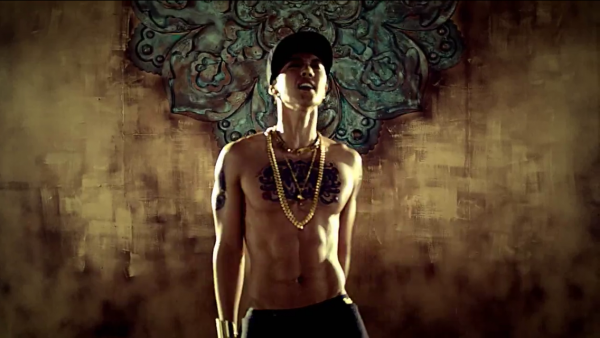 Kim Hyun Joong‘s back and ready to tackle the K-pop industry once again!

Kim returns to his “Breakdown” days with his dark “Unbreakable” music video.  The music video features phenomenal visuals by mixing traditional and modern Korean culture. Traditional dances such as pungmul nori (spinning hat dance) and geommu (sword dance) were featured along with power b-boy moves performed by Jay Park, whose rap is featured in the song as well.  Another aspect of traditional vs. modern would also be the transformation of a black horse into sleek black Lamborghini.

The music video cost an estimated 300 million won and was produced by Jo Soo Hyun, the man behind Psy‘s record-breaking hits, “Gangnam Style” and “Gentleman“.

“Unbreakable” is a hip-hop song featured in Kim Hyun Joong‘s upcoming 3rd mini-album, Round 3 , set to be released online on July 22nd and in-stores on July 29th.

Will KARA Extend Their Contract With DSP Media