The gory picture for Jay Park’s first official album titled “New Breed” was released today on January 27. Jay has his face painted like a skull and is wearing a black suit and necklaces. The idea behind the different concept could be an image of his dark and charismatic side.

Along with the picture he tweeted, “Yes the makeup was inspired by zombieboy~ right after i saw his pic i was like i wanna do that lol”. 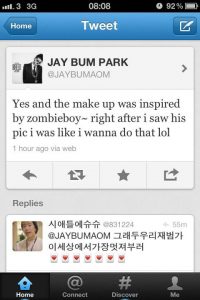 [ad#GA-468-text-vicky] The official release date for “New Breed” will be on February 7.

[EXCLUSIVE] BEHIND THE SCENES OF SIWONS GQ KOREA PHOTOSHOOT IN LONDON