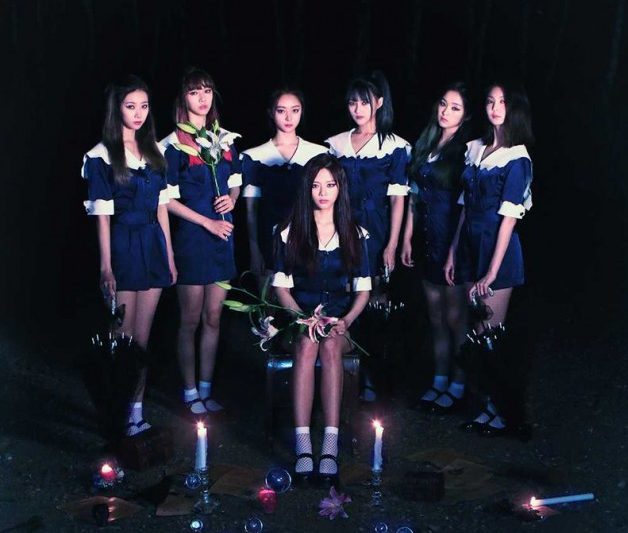 Dreamcatcher in its current incarnation has been on the music scene since January of 2017. The septet, five of whom were originally part of MINX, burst onto the scene with lead single “Chase Me,” a catchy, rock-inspired song on their first mini-album, Nightmare. With their rock ’n’ roll sound and edgy image that set them apart from their peers whose styles were mostly cute and sexy, Dreamcatcher successfully debuted under Happy Face Entertainment and carved a niche for themselves in the bustling girl group world.

The members, SuA, Handong, Gahyeon, JiU, Yoohyeon, Dami, and Siyeon, put out single albums Nightmare and Fall Asleep in the Mirror, and EP Prequel in July 2017, all of which were made unique by their signature rock sound. Tying the releases together are a horror storyline that is embodied in the music, lyrics, title music videos, and choreography. While the group still retains its femininity, the elements of their music videos highlight what makes them special. Choreography veers away from bubblegum cute, hitting hard with athletic movement, grounded footwork, and a touch of sexy. Driving drum feels keep their leading singles infused with a constant energy that makes the songs undeniably catchy and supports their more aggressive, metal image. Vocals are powerful, finding that strength in high belts, clear tone quality, and effective lyrics and phrase delivery.

Their music videos have a running theme as distinctive as their sound, with Gothic settings and story elements. Although released third, title track “Fly High” off of the EP Prequel introduces the earliest parts of their running horror storylines with a seemingly picturesque youth tinged by foreboding signs such as spiders, fog, and leather-bound books. This imagery is pitted against a bright European mansion, which later becomes the setting for “Chase Me” and “Good Night” where the seven women are a man’s worst nightmare.

Presenting their music and promotions with an ongoing concept fosters curiosity for how they will expand upon the ideas. Part of that answer was revealed on January 12 when their new promotional video for “Full Moon,” which promises a March comeback, dropped. A young girl with what seems to be a dangerous crush on a young man performs nefarious magic under the light of a full moon. While it doesn’t retain the storyline of their earlier videos, Gothic horror defines the mood of the video with a beautifully smiling girl who eerily creates mischief with candles, tarot, and witchy kitchen concoctions in order to win her the presence, if not the heart, of her beloved. The ladies of Dreamcatcher affect girlish stylings and mannerisms in the choreography for “Full Moon” that was revealed in a fancam released by Happy Face Entertainment on the 13th, but they also radiate girl-crush strength in style in which they perform and with their stage presence.

Only just beginning their second year in K-pop, Dreamcatcher is paving their own way to success. They have been touring the world, first in Japan and South America, and next in Europe beginning in February 2018. Kpopconcerts will get to interview them before they jetset to visit European fans, so stay tuned for an exclusive. You can be a part of that by sending in your questions for Dreamcatcher on Facebook  or Twitter  by 11:59pm (KST) on Monday, January 15, 2018 for a chance to have your questions answered by Dreamcatcher.

[TOUR] Zion.T Sets Off on North American Tour in March 2018