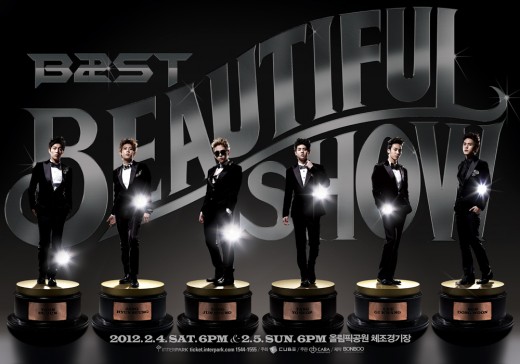 B2ST will be embarking on their first world tour from next month, ahead of that they have released their second teaser video and poster to promote it.

They are set to go on their world tour ’2012 B2ST First World Tour: Beautiful Show’, on February 4 starting at Olympic Park in Seoul and will go onto 21 cities in 14 countries.

On January 2 B2ST released a poster and the second teaser video. Fan club members received a special privilege by being allowed to buy pre-concert tickets.

The poster that they released sees the six members on trophies for each countries.

A lot of fans are expected to buy tickets for the world tour according to officials. As a result the Korean ticket site Interpark expanded its bandwidth to cope with the extra demand for the tickets.

B2ST are still reaming from end of year prizes; Best Artist of the Year and Best Song of the Year.