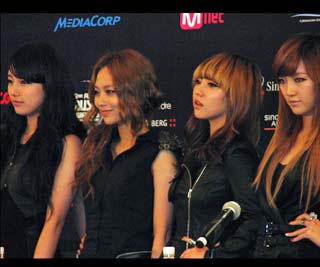 Mnet Asian Music Awards (MAMA) have taken Singapore by storm this year with an array of Kpop stars making an appearance.

MAMA 2011 was held at the Singapore Indoor Stadium with many hopeful kpop fans packing the stadium hours before the start hoping to catch a view of the likes of Super Junior and Girls Generation on the Red Carpet.

The awards were preceded with a 2 hour long press session.

Miss A letting on that they were going to present a segment with martial arts elements. Many eyes were on Miss A’s Min, who injured her neck during a full dress rehearsal for the awards.

“I’m getting a lot better. I actually hurt myself during practice for the MAMA, so hopefully I’ll give my best for the MAMA tonight,” said the singer.

SNSD were happy to be at the awards, saying “It has been a long time since SNSD has taken part in the MAMA so we are looking forward to it,”

Super Junior showed off their charm to the journalists which saw them repeat their greetings, complete with their signature hand gestures four times – in Korean, English, Mandarin and Japanese.

“It’s actually the first time we are attending the MAMA and are grateful to come here to meet all the fans and the journalists,” said group leader Leeteuk.

The awards played host to a range of artists from Japan and US with Jpop’s Koda Kumi and US rappers Dr. Dre and will.i.am due to appear.

MAMA will also see many kpop artists doing some impressive duets; virtuoso pianist Lang Lang will be teaming up with B2ST and 2NE1 gave nothing away but hinting that they had a special collaboration in store for the audience.

SNSD, 2NE1, and miss A compete head to head in Singapore