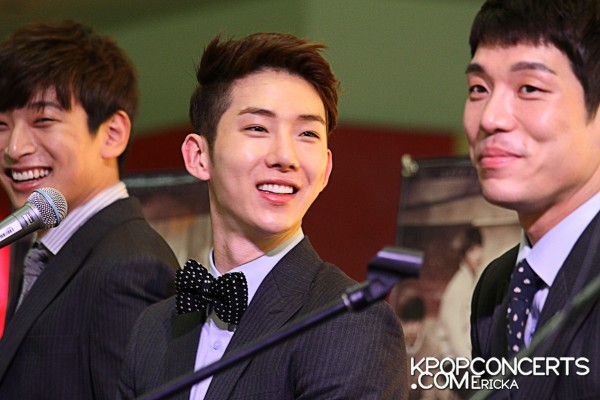 Months after being invited to perform at the second annual KCON, ballad group 2AM returned to Los Angeles to hold its first solo concert in the States – ‘Nocturne in Christmas.’

The day before the concert, the boys of 2AM held an impromptu fanmeet in Koreatown Plaza the day before the show. Hundreds of fans flocked to the mall and perched themselves all around the stage, just eager to catch a glimpse of Changmin, Jinwoon, Jokwon, and Seulong. The fanmeet was hosted by Danny Im (1TYM) for MNET America’s show, Danny From L.A. The boys answered fan questions asked by fans and select fans had the chance of a lifetime by going on stage and receiving a hug and photo with 2AM. At the end of the meet, the boys also received a 2AM cake courtesy of the Plaza.

The concert took place the following day, December 15, at Club Nokia L.A. Live. The venue was lit by the fans’ swaying Christmas light sticks, courtesy of US I AM HOTTEST. 2AM delivered a stunning performance and showcased the group’s powerful vocals that melted every fan’s heart. During one of the talk segments, the singers voiced that they were initially worried about the obvious language barrier (they even had subtitles pre-arranged for the fans). However, much to the boys’ surprise, the fans actively participated throughout the show. When the fans weren’t swaying to the soft tunes of “Regret” or “Just Stay,” they were singing along to “One Spring Day,” “I Can’t Let You Go Even If I Die,” “I Did Wrong,” or jumping out of their seats and dancing to “You’re Prettier The More I See You.” 2AM loved the energetic crowd and that music is able to transcend any barrier. 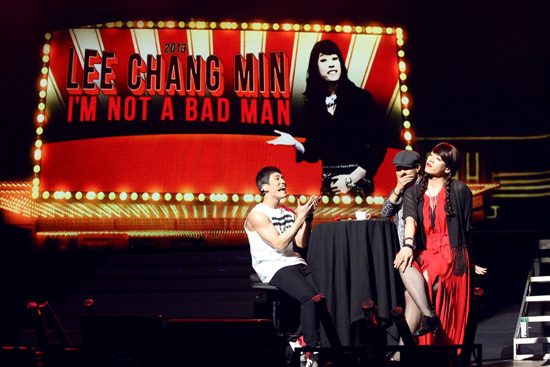 The quartet also showcased special solo and duet stages. Changmin performed his self-composed song, “I’m Not A Bad Person” which involved a playful skit onstage where he tries to win over a girl. Then Jokwon and Jinwoon took to the stage to perform their rock duet song, “Something Bout You.” After a short break, Jokwon returned on stage with backup dancers decked out in black feather attire and released his inner diva with his powerful performance to his single, “Animal.” Finally, Seulong took his turn on stage and showed off his English with his cover of Eric Benet’s “Hurricane.”

If these special stages weren’t enough, the fans went berserk when the group performed a mash-up of Michael Jackson’s “Billie Jean,” Maroon 5’s “Move Like Jagger,” and EXO’s “Growl.” Then the boys decided they wanted to try something new. Changmin and Jokwon take care of the higher notes in songs while Seulong and Jinwoon sing the lower ones. To mix it up a bit, the boys switch parts and sang “Can’t Let You Go Even If I Die” once again.

Sadly, all shows must come to an end. For their encore, Changmin, Jokwon, Seulong, and Jinwoon performed a song that they “never imagined performing in California” – their debut song “This Song.” Of course, what kind of a Christmas concert would this be without a Christmas song? 2AM finished off its first solo concert in Los Angeles with its energetic rendition of “Santa Claus Is Coming to Town.”

MC The Max Release Teaser for "Wind That Blows"