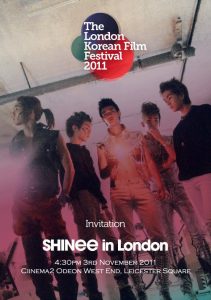 Earlier today, the Korean Cultural Centre UK stated that SHINee will perform at the Odeon, West End London on 3rd November at 16:30.

To celebrate the 6th year of the London Korean Film Festival (LKFF) organised by the Korean Cultural Centre, SHINee will hold a mini concert on the night of the opening gala before the screening of the “War of the Arrow”.

The 5 members of SHINee will also attend the screening of the “War of the Arrow”, which will open the London Korean Film Festival of 2011 with the film Director Kim Han Min.

On 19th October, Cube Entertainment announced that the United Cube Concert will take place in London on 6th December. Although the Korean press announced that Cube will be the first to perform in the UK, SHINee will perform a month before the artists from Cube, making the first K-pop concert in the UK actually by SHINee.

Last June, when SHINee came to the UK to commemorate their Japanese debut at Abbey Road Studios, hundreds of British fans came to show their support.

The tickets will cost £20, £30 and they will be available from the Odeon website. 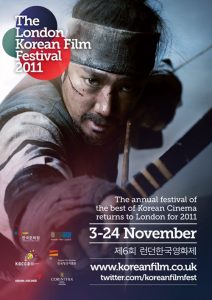