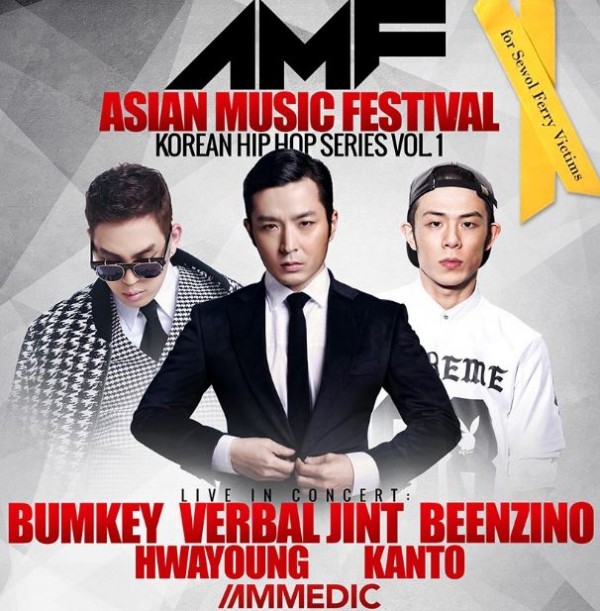 Korea’s top hip-hop and R&B artists will be making their way around the U.S. for the Asian Music Festival! Bumkey, Verbal Jint, Beenzino, Hwayoung, and Kanto will be performing in New York, Seattle, and Los Angeles as part of the Asian Music Festival’s “Korean Hip Hop Series Vol.1.” (Update: Beenzino will NOT be performing at the New York show and Sanchez will be unable to participate in the full tour and has been replaced by singer, Hwayoung.)

In addition to the line-up, other artists will be featured in each stop. The Los Angeles show has announced IAMMEDIC, DANAKADAN,  DJ B and Young Min Joo as special acts.  Performers for the other two stops have still not been released.

The tour will start off in New York on Thursday, May 22 at the B.B. King Blues Club & Grill, followed by Seattle on Friday, May 23 at the Showbox, and will wrap up in Los Angeles on Sunday, May 25 at the Belasco Theater.

Tickets for all three shows can be purchased in the links below:

Due to a high demand for VIP tickets, the organizers decided to open up additional spaces at the front and side stages for the Los Angeles show so more fans can be up close and personal with the artists.If you have already purchased GA tickets and would like to upgrade, you can use the “VIP Upgrade” button on the ticketing site to purchase the upgrade. You must already have purchased a GA ticket in order for this to be valid. You will be required to bring in your GA ticket upon entry.)

Want to know more about the artists performing? Check out some of their hit songs!