SNSD’s Yoona was recently presented with an official certificate of appointment as Honorary Ambassador of Jung-Gu by the district’s mayor, Choi Changsik.
[ad#GA-468-tx-LM] 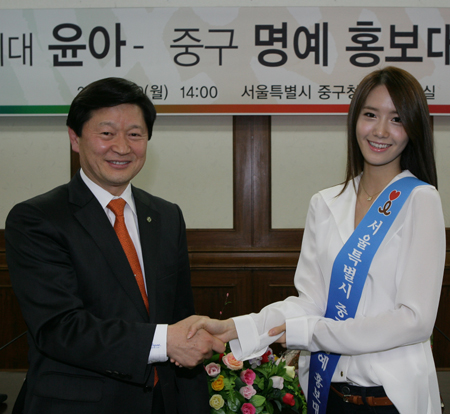 The mayor stated “The top star (Yoona), who matches well with the central district of Seoul, Jung-Gu, will serve as honorary ambassador.” Also, Yoona said in regards to her appointment, “Together with the other SNSD members, I hope to visit the ‘Street of Hallyu Stars’ in Jung-Gu.” She continued with “In the future, I will work hard to promote the beauty of Jung-Gu, which is the centre of both tradition and modernity.”

As honorary ambassador, Yoona will be carrying out activities in various areas such as Myeongdong, Namdaemun, Bukchangdon Tourism Special Zone, and Dongdaemun Fashion Town Special Zone over the course of the year.