On June 16th, YG Entertainment, who manage groups such as Big Bang, 2NE1, PSY, Tablo, se7en and Gummy, kicked off their 2012 global auditions in London.

Hundreds of young people from around and outside the U.K. showed up at London’s Korean Cultural Centre from early hours of the day until the evening in hopes to become a YG trainee.

Due to the amount of people who had shown up, the auditions were actually delayed and people were waiting out on the streets in a mass crowd for hours. However the atmosphere was still upbeat and gained a lot of attention from pedestrians walking by. 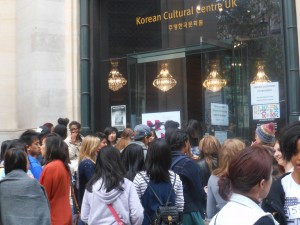 KpopConcerts interviewed some of the hopeful auditionees, click below to watch:

AA (Double A) have announced they will be coming back soon