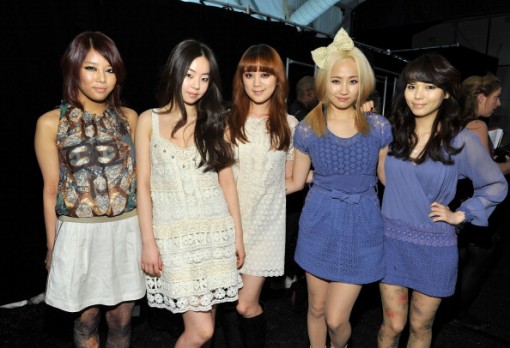 After coming back into the showbiz world, Wonder Girls talk about their feelings on coming back.

Kpop’s Wonder Girls finished off their comeback performance on Music Bank on the 11th after being away for a year and a half.

Starnews interviewed Wonder Girls just before their stage performance. They said, “We were very nervous when taping our performance because it’s been a while since we had our last performance in Korea.”

On the Music Bank show Wonder Girls performed their new song on the new album released on the 7th called “Be My Baby”.

Yu Bin said, “I was really nervous. It showed on my face. But I felt really good to see our fans close because we haven’t seen each other for a long time.”

Sun Ye said, “Our fans and people from our agency gave us cake as a comeback gift. I’m so glad that today is a happy day for many people, not just for us. I almost cried when I stood up on the stage, but I tried not to because everyone else was going to cry if I cried.”

Ye Eun said, “It was very special. We did our best to make the songs included in our new album. We are planning to perform other unit songs and solo songs through radio programs or variety shows.”

AA (Double A) "So Crazy" debut on Music Core

G.NA PERFORMS I`LL BACK OFF SO YOU CAN LIVE IN ENGLISH AT KOLLABORATION 2011