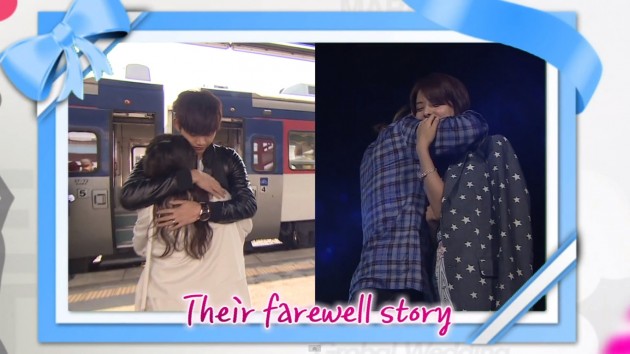 Everything that has a beginning comes to an end.

A show designed to develop much better understanding of various cultures, We Got Married Global Edition premiered last April 7 and was aired every weekend in 21 different countries. Beastly Idol, Taecyeon of 2PM and the cute actress from Taiwan, Emma Wu(aka Alien Couple) partnered in the show and revealed the fun and enthusiastic side of married life. While the charismatic FTIsland Leader/Vocalist, Hongki and a beautiful Japanese actress Fujii Mina (Squirrel Couple) displayed the romantic and sweet stories of their newlywed life.

Alien couple, Taecyeon and Emma, took the train for a romantic farewell trip to commemorate their last day as a virtual couple. They exchanged presents while on the train, set up a tent to camp and share their thoughts for the very last time. Later, back to the train station, Emma shed tears as they bid her last goodbyes while Taecyeon wished he could meet Emma on a different train station someday. In an interview, Taecyeon felt sorry that he didn’t treat her better.

On the other hand, the Squirrel Couple, Hongki and Mina, decided to share a meal together in their newlywed house. Mina cooked the chicken stew Hongki wanted to eat while Hongki tried to find the hidden puzzle pieces which contained Mina’s heartfelt message for him. They also reacted their first meeting and Hongki apologized that he wasn’t able to fulfill some things Mina stated. On a car theater, Hongki pulled off his last surprise event and Mina cried as they finally bid their farewells.

The episode will air on July 14.

2NE1's Dara and Bom to release a new series!