If you’re into K-pop and British Pop, then four-member rock band The Rose should most definitely be on your radar. After an immediately successful August 2017 debut with “Sorry,” which was named on Billboard’s “The Best K-pop Songs of 2017: Critics’ Picks” list, The Rose has kept themselves busy with a whirlwind of activities. With two singles and accompanying videos dropped in the second half of 2017, they’ve received warm welcome from local and international fans, and have quickly become a mainstay of the genre.

Made up of four members, Woosung on vocals and guitar, Dojoon on vocals, keyboard, and guitar, Jaehyung on bass and sub-vocals, and Hajoon on drums and sub-vocals, these rockers have the talent, the looks, and the teamwork that have spelled their current success. Three of them (Jaehyung, Dojoon, and Hajoon) began as buskers and created a name for themselves as singer/songwriter indie group, Windfall. At the time, they performed originals and covers, many of which the group still perform today. When Dojoon recruited Woosung, the quartet was complete and debuted under J&Star Company as we know them now.

Barely six months into their post-debut career, The Rose has already seen major stage time with 2017’s The Rose First Concert – The Black Rose Day, and will soon be gracing the stages of Europe with 2018’s The Rose First Europe Tour – Paint it Rose. Check out their tour dates: 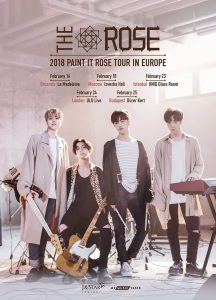 Woosung’s and Dojoon’s ability to dexterously navigate their vocals is a major selling point of The Rose as a solid group, along with the band’s ability to craft instrumental lines and textures that ripple with emotion. They slip right into the grooving rock genre while also infusing their tunes with a lighter pop edge that can also be described as a soft-rock British Pop-inspired style.

The group’s 2018 is looking bright as they embark on their tour and shape their rookie year with solid musicianship.

Kpopconcerts.com had the opportunity to the boys before they set off on their European tour. Catch our exclusive interview and charades game with the boys, below!