As kpopconcerts.com has previously reported, 2PM member Nichkhun has recently been in a car incident where he was under the influence, colliding into a motorcyclist.

Super Junior’s Choi Siwon made several tweets in English on the issue, read them below (starting from the lower tweets): 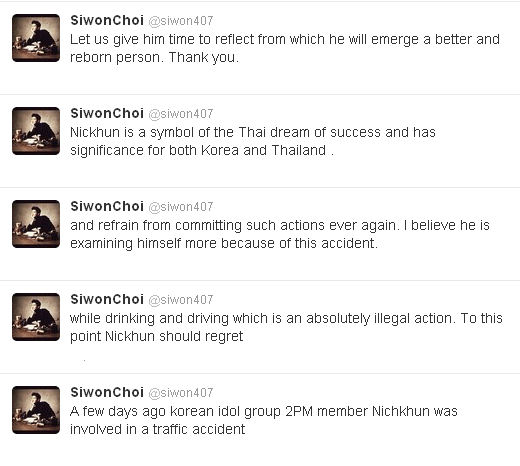 It seems Siwon is taking a legal point of view, stating that regardless, Nichkhun has broken the law by driving whilst under the influence. However, we can also see that Siwon is not ‘hating’ or speaking about Nichkhun in a negative manner as he says Nichkhun is a symbol of the Thai dream of success, having significance for both Korea and Thailand. To conclude his series of tweets on the matter, he asks to give Nichkhun time to reflect in order to enable Nichkhun to emerge a better and reborn person.

Fans have responded by thanking the idol for showing his support in such a difficult situation for Nichkhun, 2PM as well as their fans.