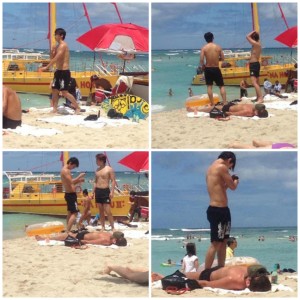 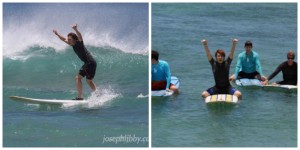 Super Junior travels to Hawaii for a photoshoot. Members came in separately based on their schedules. Sungmin, Shindong and Kangin, arrived last July 09, followed by Siwon and Donghae on the 10th while Kyuhyun, Ryeowook and Eunhyuk joined them earlier in July 13.

The boys never failed to inform their fans that they are enjoying the sun and surfing as they update their respective social networking sites with pictures and blogs. Sungmin even shared his great interest in surfing as he just discovered his talent for it and he’s proud of it.

They got themselves some leisure time and went to learn surfing in the famous Waikiki Beach. Hans Hedermann Surf School accommodated the enthusiastic idols while Photographer Joseph Libby revealed his snap shots of the boys in action. Adding to that, there were some fans around the area caught Donghae, Sungmin and Kangin tanning along the shores.

Some fans actively commented “I’m so happy for them, this is like spending their holiday together with other members not just coming for work” and cheered for them to enjoy themselves.

The boys will be releasing their first full-length Japanese album with a carrier single titled “Hero” on July 24, 2013 under Avex Trax. So, stay tuned for more updates!

For the mean time here’s the PV of “Hero”