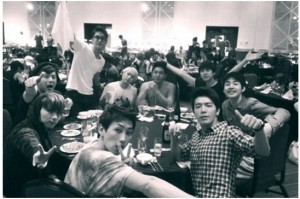 Then, sometime on August 6, Super Junior member Donghae uploaded an image on his Twitter along with the comment ‘We are Super Junior. SJ Thanks Japan! Good night!”

The uploaded picture showed the members seated around a table and having dinner. Each member posed for the camera and we can say they having a great time. It’s nice to see these boys all gathered once again like this.

The twitter world replied variously, like “They’re all handsome”, “I love you, Super Junior”, “ Wonder what they are having for dinner.”

ARM (Amateur Running Man) in the Heart of London