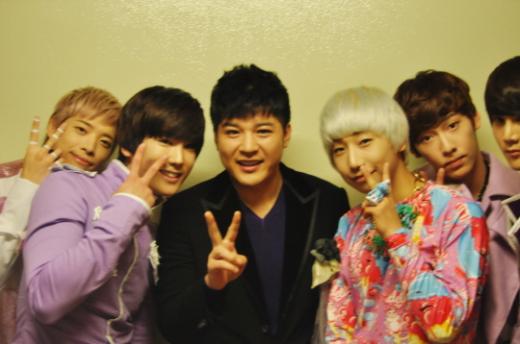 AA’s Woosang commented on his tweeted picture on November 29, “I met Shindong for the first time in a long time. Thank you for taking care of me that day.”

The next day a spokesperson for AA (Double A), stated that the picture had been taken on the set of KBS’s Music Bank on November 25. Shindong met Woosang and the rest of the boys in the waiting room.

AA’s leader, Woosang, was the choreography director for various Super Junior songs like “Rokuko,” “Don’t Don,” and “A Man in Love” in 2007. Since then Woosang and Shindong have remained close friends.

The spokesperson for AA says, “When Shindong met Woosang, he said that he was happy to see him as a singer and he copied his dance moves when he was teaching Super Junior members.”

Woosang says, “It felt like a dream, talking with a big star in the waiting room. I’m so happy that my dreams are coming true. I want to thank Super Junior because they helped me become a singer and I want them to be proud.”

Double A are currently occupied doing work on their new song “Because I’m Crazy.”

THE RED CARPET CLOSET: WHO WORE WHAT TO THE MAMA`S 2011