As expected of Girls Generation’s effect, the debut of Taetiseo has been really popular among netizens and the search portals have been busy with their searches. SM has been releasing the teaser bit by bit. Recently, the jacket cover for “Twinkle” has been released!
[ad#GA-468-img-May] 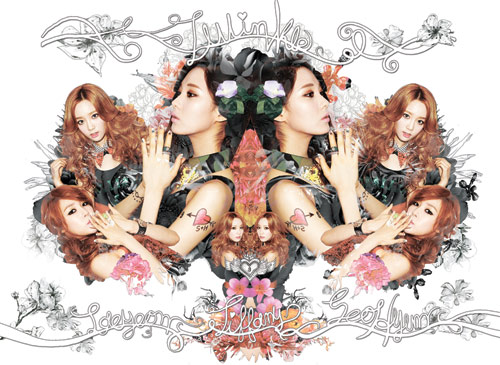 The girls look gorgeous in this jacker cover photo, which seem to be girly heaven meets sexy tomboy! The girls will be releasing their title track through iTunes for the global market with a special photo booklet that will be different from its offline release.

The title track, “Twinkle”, is the production of Jam Factory‘s Brandon Fraley, Jamelle Fraley, andJavier Solis, and is described to be a modern rearrangement of ’70s and ’80s style music like Stevie Wonder. As it is a medium tempo dance track of the funky soul genre, fans can definitely expect to see a new side to the girls.

Following the title track release on Itunes and online portals on April 29th, the full album will be released the next day on the 30th. Fans can expect the album’s offline release on May 2nd.