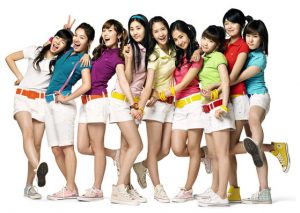 After releasing the first video teaser for their comeback, SNSD have released another one showcasing what could be the bridge to their song “The Boys”.

The girls are sexy and sophisticated, wearing a combination of black and white “smart” clothes, consisting of high wasted trousers and shorts, emphasising their S line figures and tiny waists. The video cuts to clips of them looking more dressed up in evening wear, teasing audiences and leaving us anticipating what their new concept has in store.

The first teaser exceeded 1.6 million views in 3 days, after being released on October 1st. The new teaser is about half the length of the first, but gives us a peek of the dance routine. Not only has it been released as of yesterday (October 14th), but there’s a Korean version and an English version.

“The Boys” is more like an anthem, with SNSD saying “Girls bring the boys out!”.
Its a big contrast to their more girly, cutesy previous concept when they released “Gee” and “Oh”. “The Boys” seems to enforce the idea of “girl power”, which is probably why their comeback is so highly anticipated across the world.

The original release date for their worldwide comeback was meant to be on October 4th, but was postponed due to other promotional acitvities. Their comeback is now expected to air on KBS Music Bank on October 21st. Let’s look forward to it!

Promoter for Kpop Team clubbing Check us out at http://www.kpopteam.com !