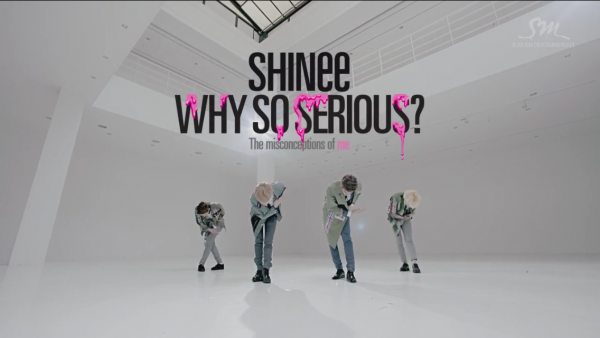 SHINee‘s back with their much anticipated music video for “Why So Serious?”

The full music video for SHINee‘s latest track was uploaded on April 26th at noon, much to fans’ delight. The music video portrays SHINee (sans Jonghyun) as they try to win a woman’s heart. The music video gives off a playful and edgy feel with the contrasting black-and-white sets along with the boys complimentary outfits.

With “Why So Serious?“, SHINee proved once again that they can adapt to different genres and styles. The song itself is a fast-pace and upbeat song that gives off a rock/funk vibe. Although SHINee‘s lead singer Jonghyun was unable to participate in the filming due to his injuries, Taemin filled in and sang his parts.

SHINee further raises the bar by displaying their dance abilities through their intense choreography, choreographed by Devin Jamieson.