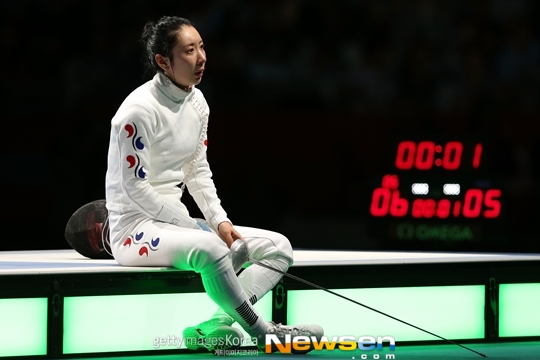 If you are keeping up with the London 2012 games, you would have already heard about Shin Ah Lam not making it through despite her hour long protest.

There have already been an array of celebrities voicing their opinion on Twitter.

HaHa posted, “How lonely and furious must Shin Ah Lam be sitting on the piste all by herself. I’m so livid, I think I might cry. I’ll pray for you! You’re not alone. We will all pray for you.”

Singer Jung Jae Hyung stated, “I want to protect our athlete Shin Ah Lam! Those dirty referees! I mean, if there are rules then you referee according to those rules. If your decision was not in line with the rules than you accept your mistake and either call a rematch or find a different option.”

Tiger JK, “The referees need to get their butts spanked for 1 second… an endless second.”

KARA’s Gyuri wrote, “Wow I got to Sapporo, Japan in one second! ^^,” mocking the endless ‘1 second’ clock error that occurred during Shin Ah Lam’s match.

Despite the appeals, judges have not retracted their decision in Shin Ah Lam’s match against German gold medallist Britta Heidemann.

The T-ara & Hwayoung Conflicts: The Break Up