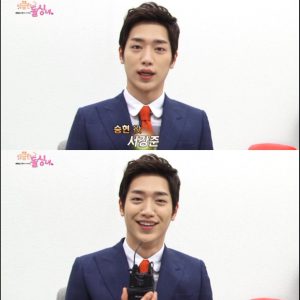 5urprise‘s Seo Kang Joon releaved his ideal type and how he maintains his abs in a BTS clip for “Cunning Single Lady“!

When asked what was most difficult while filming the drama, he replied “Besides the usual tiredness and sleep deprivation, filming was actually very fun, as my sunbaenims helped me a lot. I learned many skills in acting through them.” He also revealed that co-star Lee Min Jung had especially helped him with difficult acting scenes. He said “My sunbaenims taught me many important know-hows as a rookie actor.” When asked what the most memorable scene he filmed was, he replied that his confession dialogue to Lee Min Jung had remained deeply with him. He said, “Since it was my first skinship scene, and a back hug at that, it has become the most memorable for me I think.”

He also revealed his ideal type, saying, “Although I notice outer appearances at first, I especially notice how well I can communicate and relate with her. I would have to say that my ideal type is someone who I can converse well with.”

To the question “Are there any secrets behind your abs?”, he replied, “I used to exercise and work out frequently, but ever since filming for the drama, my abs have gradually started to fade away…” ending with an embarrassed laugh at the end.

He wrapped up the interview with the warmhearted comment,”Thank you to all those who watched ‘Cunning Single Lady’ and showed us a lot of love. From now on, I hope to show a better side of myself through future productions. I will strive to become a more progressive actor.”

Let’s keep our eyes out for our future gem of acting, Seo Kang Joon!