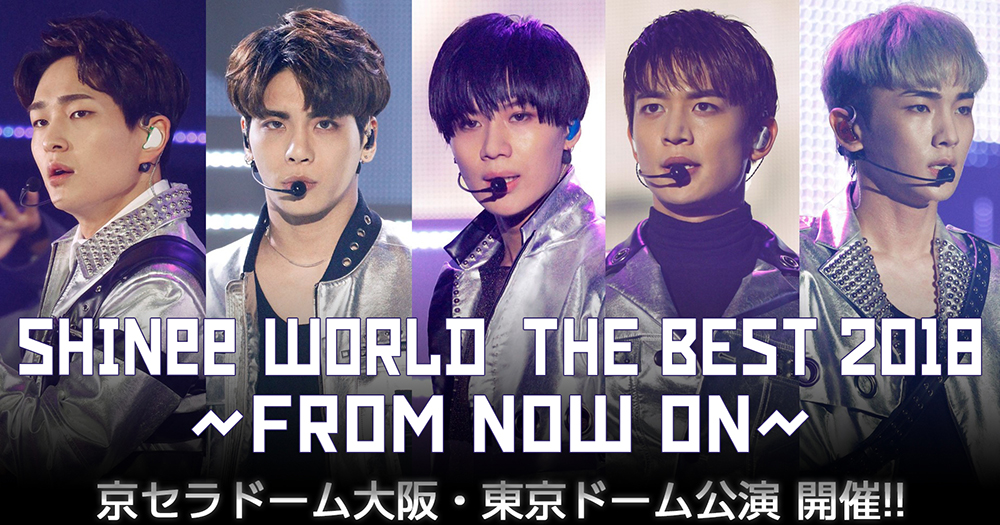 When we lost Jonghyun, the charismatic main vocalist for global K-pop sensation SHINee, it was a dark moment for many. The quintet as we knew it was no longer and the music that was created and loved by many became painful to listen to, at least for me. SHINee was a group I discovered seven years ago and their music and artistry brought my sister and I even closer together and allowed us both to indulge in absolutely wonderful entertainment and talent. It took both of us quite some time to even listen to their music after his passing, but when it was announced that the SHINee World Tour – The Best – would still be held in Tokyo, we, like many other fans, decided to support Taemin, Onew, Minho, and Key as they took the stage without their colleague, brother, and friend.

Although my sister couldn’t go, we both planned for me to go, purchase merchandise and enjoy what we both knew would be the hardest and uplifting concert experiences in a person’s life time. Two friends of mine, also hardcore Shawols, decided to join me in Tokyo and go through the experience with me, because that’s what this was: an experience. It was not just a concert, but a farewell to Jonghyun and welcome to his enlightening spirit as his colleagues started out on their own. 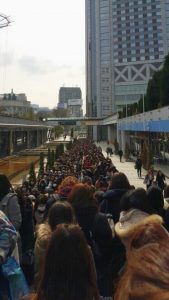 Admittedly, the worst part of the experience was my very first wait in line for SHINee merchandise. The organization for the sale and purchase of goods was impressive, the seven hour line mapped out with ropes that Japanese and foreign fans respectfully minded. And in case you think you read that wrong, yes, it was a seven hour wait for merchandise. After receiving a yellow chip at the start of the line that is traded in at the merch booth for the right to purchase merchandise, the wait was a slow, painful, seven hour crawl towards the finish with fans munching on snacks, and escaping to the bathroom while friends saved spots. I had time to listen to every single SHINee album on my phone and desperately imagine finally getting to the front of the ridiculously long line.

When I finally did, silently giving thanks to every god under the sun, I bought a SHINee bag, coin pouch, shirt, pins, and light ring, the last of which was the most impressive. With the light ring I would become part of the amazing pearl aqua green ocean. 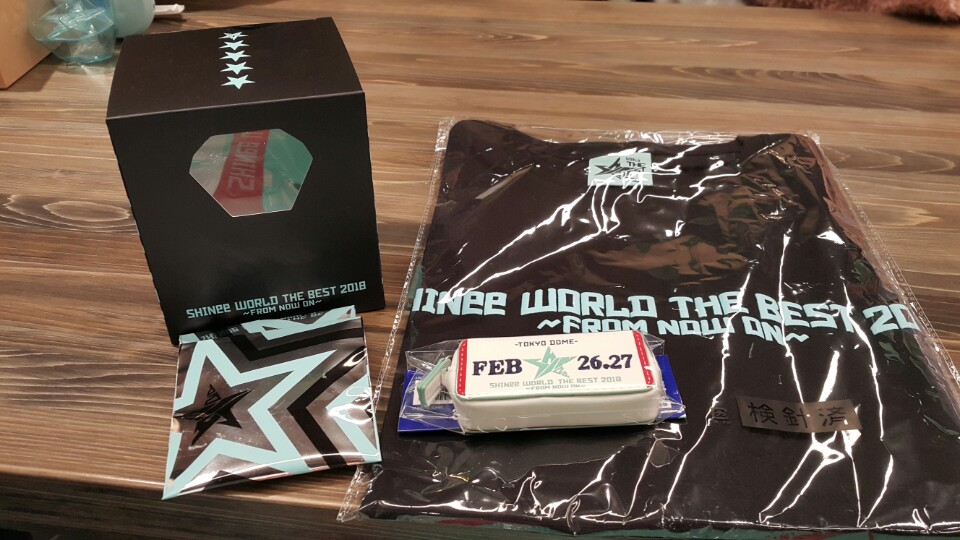 I then joined other fans as they filed into the Tokyo Dome. Again, I was impressed by the organization and the Dome’s method of functioning, how fans were checked in, light sticks were activated and programmed, and how helpful the ushers were. We had good seats that we won in a raffle (how to get these tickets is an op-ed in-and-of-itself).

Me and the other fans were definitely primed to cry, anticipating what it would be like to see only four members on stage. It become more intense as the dome flooded with fans, each with light sticks and hearts filled with support for SHINee. When the dome lights went down and the light rings began to shine, it was the most amazing experience that brought tears to my eyes and silent awe from mass of fans. “Colors of the Season” played and my tears started flowing. I can’t even remember what song they first sang, only that when four of them walked on stage and I could see their vacant, tired eyes on the screen I broke down in tears. I heard sniffles all around me.

Rather than go through every song, I’d like to highlight the emotional journey of the Tokyo Dome experience and how amazing it was to be part of the mass of support to a group that is still heartbroken and yet performing with every fibre of their being. 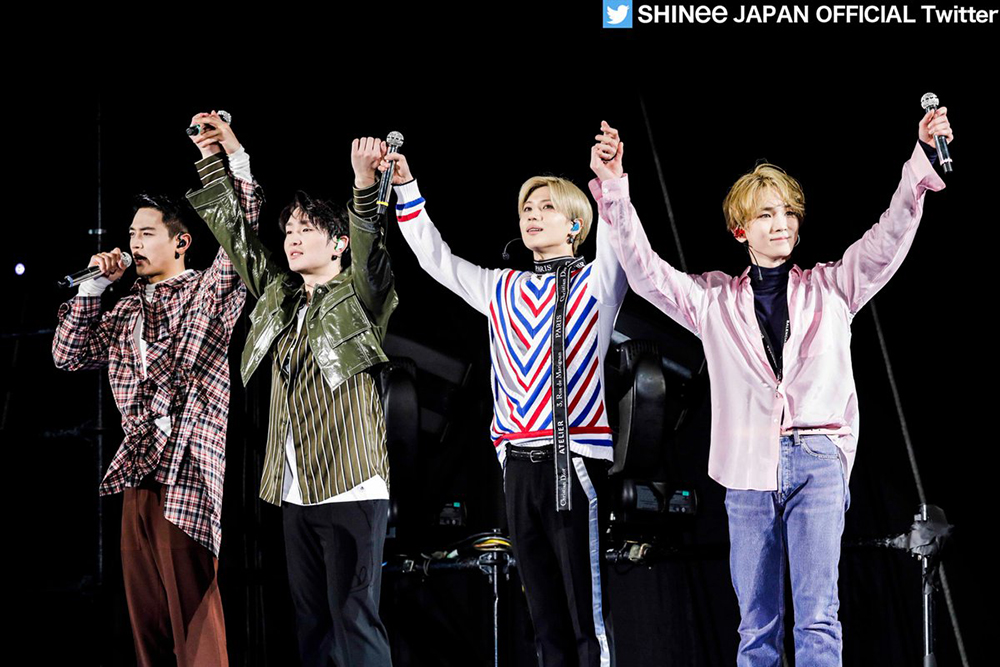 Starting off quietly, the boys definitely looked shaken by being on stage for a third time without Jonghyun. For me, it was heartbreak all over again. Their steady voices belied their emotions and for the rest of the concert, I was consistently impressed by their quality of their performance and how strong they were at sharing Jonghyun’s parts with his spirit and the audience. At one point, Onew even channeled Jonghyun’s favorite belting pose: 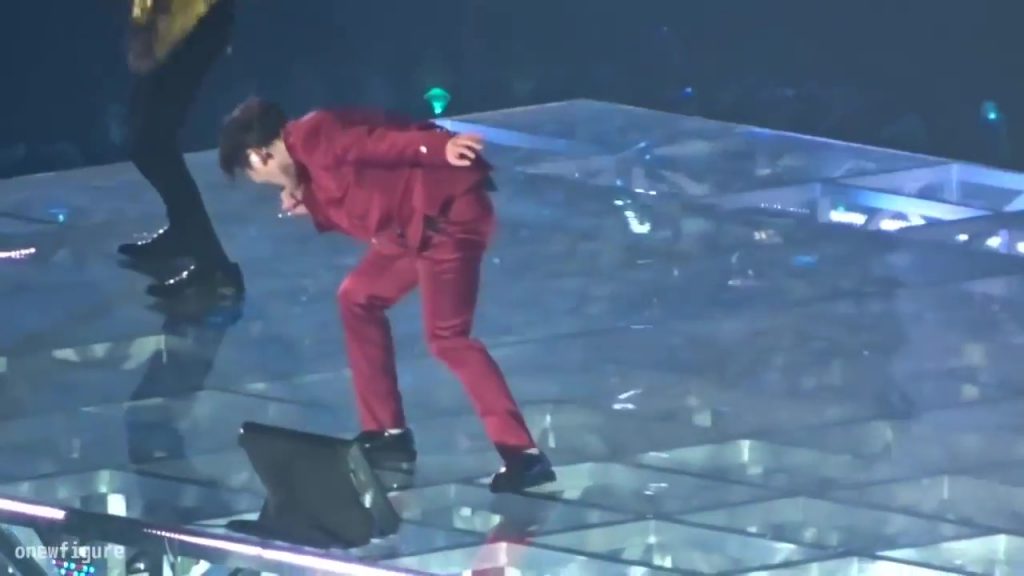 The energy levels of the concert worked in an interesting way. It started pretty low key and built in intensity over fifteen or twenty songs. Then it brought the energy back down. It was a beautiful way to remember Jonghyun, let the boys and the audience have fun, and then give our hearts to 5HINee as the amazing two-and-a-half hour concert ended.

Complimenting that energy play were the light sticks, which fans know well. They are seriously everything we’ve watched and read about and more. The entire dome danced and played with color and visual rhythm along with the quartet in a spectacular visual display that I would definitely pay to see again.

I’d like to tell you about some of my favorite moments: Key and Minho goofing around, showing some light-hearted playfulness that was sorely needed after the audience were crying buckets of tears. Onew predictably tripped in his guitar cart that brought him around the dome to greet the audience in person. Taemin tipped over the edge of his hot-air balloon, ecstatically waving to fans with a grateful smile. Key singing some of Jonghyun’s runs with incredible alacrity and joining Taemin in some of the most energized dance moments I’ve ever seen from the pair – this is saying something as the two are some of the strongest dancers in the industry. The quartet was definitely channeling grief and letting it pour out in their performance. Minho was the most stoic figure, bowing deeply constantly, expressing thanks to the fans, and deriving energy from the fans who made the pearl aqua green ocean possible.

And of course, when “Sherlock,” my gateway song, played, I couldn’t believe that I felt joy listening to it even though I was crying at the same time. The choreography was gracefully modified, but it felt like Jonghyun was still there.

Then there was the moment when “End of a Day” played in tribute to Jonghyun with words from the members. It was one of utter grief for me, but it also was unbelievably cathartic. Being with so many people who care about a group and their music and their contribution who are also grieving is such a validating experience. Grief over a group is not a silly, petty thing. It is as real as grief over a loved one present in one’s life. Fans put time and energy into cultivating relationships with singers and performers who do the same even if they aren’t personal.

The last song, the absolutely gorgeous new number “From Now On,” was a clear ode to Jonghyun with his voice clearly singing his parts through the speakers as the boys, dressed in white suits with roses tucked into their pockets, sang with faces twisted in grief and eyes brimming with tears. Jonghyun’s mic stand stood in the middle with a rose attached and a spotlight on him, because it truly felt like he was there. And unlike the start of the concert when Onew, Taemin, Key, and Minho seemed a little lifeless, the last performance seemed to be a mix of the energy of the audience and their own personal battles that settled into an outpouring of emotion channeled through song. When the song was through, the boys attached their roses to the mic stands and slowly backed away, leaving the mic stands adorned with roses in the five spotlights and an audience full of sad, grateful, awed tears.

As everyone left, there was this unified feeling of enervation and gratefulness to 5HINee. I felt so much during that concert that I was completely exhausted, but also glad that I’d gone. It was such a magical experience and I’m glad to have been part of the audience that energized four young men who got back on stage too early. It brought a sense of closure and finality to our new reality as a fandom.

Colors of the Season

-Medley #1- (audio only – this concert doesn’t have VCRs)

The World Where You Exist (Kimi ga iru sekai)

Why So Serious (KR)