Despite MBLAQ being surrounded by recent breakup rumours, the five-member group has announced that they would be releasing their seventh mini-album Winter on November 25.

On November 21, the group’s management agency J. Tune Camp took to their SNS accounts to release the tracklist of the group’s upcoming album, which will consists of 5 self-written and composed tracks. 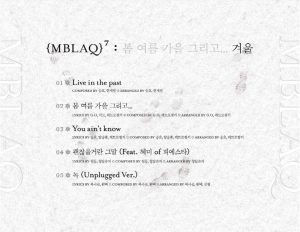 The title track of this album ‘Spring, Summer, Autumn, and …’ is composed and written by members G.O and Mir, while the other tracks like ‘Live in the past’ and ‘You ain’t know’ (featuring Fiestar’s Hyemi), are written by Seungho and Thunder (Cheondung) respectively. Fans of MBLAQ can also expect to hear the unplugged version of the group’s 2011 song ‘Rust’.

Earlier today (November 24), the group members’ sombre concept photos were also released on the site, showing the five members in black outfits, looking away from the camera. This comeback is anticipated to be an emotional, sombre one, so as to match the winter atmosphere.

In other news, the quintet will also be holding the MBLAQ Curtain Call concert on November 29 and 30, at Seoul’s Olympic Hall, Olympic Park.

A Pink Release "LUV" MV From Their Comeback Mini Album