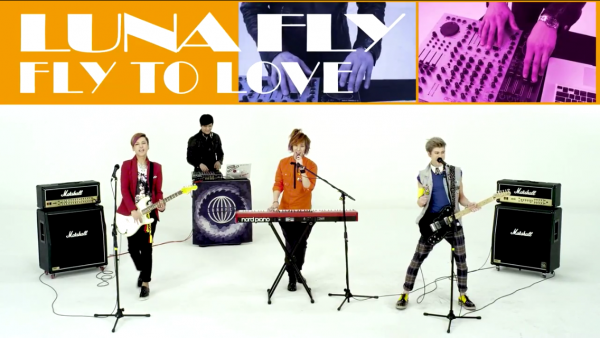 On April 3rd, Lunafly released the full music video for “Fly to Love“.

“Fly to Love” portrays the boys’ longing to live life to the fullest by traveling around the world with their significant other. In the video, Sam, Teo, and Yun are seen rocking out to the song, dressed in bright colors to further highlight the up-beat song. The music video also plays with typography as it incorporates the English lyrics throughout the video! As a further treat for international fans, Lunafly will also include the official English version of the song on their first full length album, also titled Fly to Love.

Lunafly debuted in 2012 with “How Nice Would It Be” and has already established a large following overseas! Rather than perform on the popular music programs like Music Core and M! Countdown, Lunafly usually holds numerous shows at cafes throughout Korea and special showcases abroad such as in Japan and Indonesia.

The group showcase their vocals and instrumental talents primarily through Youtube videos. Although Sam (Korean/British) is the only English speaker of the group, all three perform English songs flawlessly. The group further catered to English speakers by creating English versions of their singles as well! The group has also held numerous live chats with their fans. These decisions allowed fans to feel more connected to Lunafly and thus led to a large fanbase in a short amount of time.

Check out the music video for “Fly to Love” below!