Week 4 at the Kpop Academy focused on the Korean War from 1950-1953, we were given an insight into this historical event as the KCC gave us the privilege to watch popular K-movie “71-Into the fire” starring famous Korean actor Kwon Sang Woo and Big Bang’s T.O.P. Later we were then given an enlightening presentation by war veteran Brigade Parritt who spoke about his time during the Korean War and what he experienced, it was clear he had his own view on the political matters between north and south Korea, he also delighted us by speaking in a range of different languages.
We were also given our weekly assignment and presented with a free ticket to see KCC’s end of the month Korean film screening “Meet Mr. Daddy” at the Apollo cinemas,  director Park Kwang-su  will also attend.

Film review: 71:Into the fire

Starring
Ok, so I’m a biased TOP fan, I was so excited to watch this movie, I initially went into it thinking TOP, TOP, oh my god its TOP, everyone in the Kpop Academy knows how much I love him i.e. my first week there announcing him as my future husband and hence the picture displayed above. Whilst getting into the film my mood slowly but surely changed, I went from an excited fan to an emotional wreck who too felt the effects of what these soldiers went through in the Korean War, this film no longer became about TOP.
This film was based on true event of 71 student soldiers during the Korean War in 1950 who were given the difficult task of holding down their base at the Pohang girl’s middle school for 11 hours.  As the North Korean army led by commander Park Mu-Rang (Cha Seung won) continued to push South, the army in the South enlisted a group of inexperienced students as they were short on recruits; this film focuses on a those young men who had to band together despite their differences in order to hold off the elite 766 North Koreans whilst awaiting reinforcements.
The group of students were led by Oh Jung Beom (TOP) who was chosen by the South’s army General Kang Suk-Dae (Kim Seung 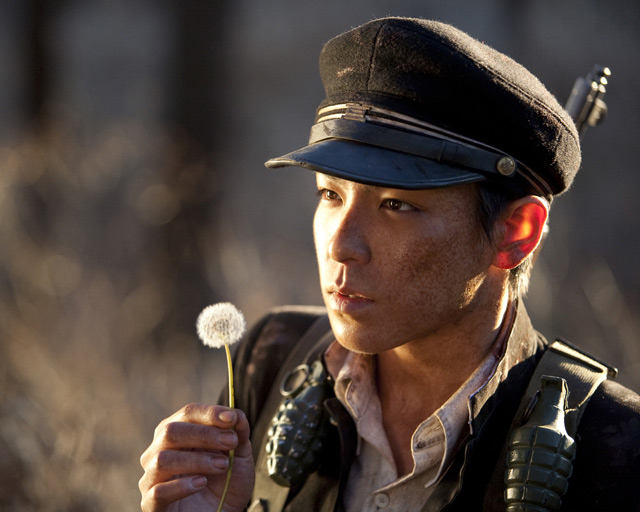 woo) as he initially had the most combat experience.  Oh Jung Beom character is perceived as the soft spoken individual with little or no leadership skills who in order to lead a bunch of rambunctious solider needs to do a lot of growing up fast. His rival in the group Ku Kap-jo (Kwon Sang Woo) a released prisoner who’s rebellious character criticizes Oh Jung Beom and the two continuously butt heads throughout out the movie. From the beginning to the end of the film you are greeted with scenes of mass chaos as gunfire, big explosions and people dieing are the first things you see on your screen. In the opening scenes TOP’s character is no more than an errand boy at the beginning of the movie, little did he know his part in the war would play one of the most crucial and memorable roles. As the film pans out there are a sequel of events leading up to the emotional ending, oozing action, suspense, laughter, sadness, anger all rolled into one. The end scene in which the North Korean commander and his soldiers swarm the school, forcing the student soldiers to use a range of streetwise tactic’s and improvisation’s to fight off their enemies as they have no real strategic  military experience
My thoughts
I won’t spoil the ending by saying what happens; let’s just say if u like war movies that are exciting, moving and humorous then you’ll like this film, even if you’re not type to get emotional during a movie I think this film will touch u in some kind of way. I watch this film at the KCC during class, and as I said in my previous paragraphs I went into the film as a fan n came out very emotional. A lot of different parts of this film were touching, sad and just plain hard to take in.  I found myself caring for all 71 student soldiers even though only a small hand full were highlighted, just knowing  this was a true story is so moving that you put yourself in their position and think to yourself what they went through was a lot. I was not alone in my feeling, once the movie finished I realised quickly that most if not all of my fellow class mates were crying. TOP’s performance I can’t fault, in the beginning of the movie I was skeptical as he dint have many lines, but then I got to know that that was the character he was portraying and as the movie continued his performance grew.  This truly is an amazing film, I think definitely underrated, if you haven’t seen it then please do, guy or girl you will not be disappointed!
71: INTO THE FIRE TRAILER
Previous Article