Week 6 at the Kpop Academy focused on meeting an influential and very important leader this week, we were given the privilege of visiting the Korean Ambassadors home in London. On arrival we were greeted by his Excellency Ambassador Choo and his exquisite wife Madame Song, and then escorted to a dining area where we were given some traditional Korean cold sweet and savory dishes and beverages; consisting of rice cakes, cold soup, rice balls etc. After this were given a Q & A with his Excellency then given a lesson in the art of Korean etiquette known as Jeol. We then received our weekly assignment in which we were ask to choose from 3 tasks, I choose to research one of the Korean major holiday; thus being Han-sik (Cold food)holiday/festival. 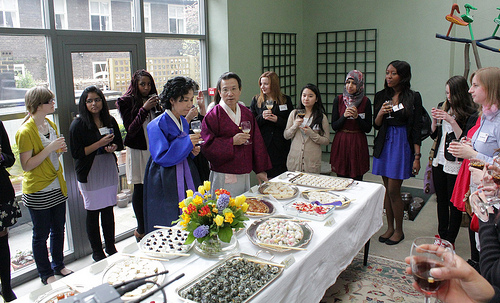 Han-sik (한식) : History and customs
Han-sik is one of the four major Korean holidays, the others being Seol-nal, Dan-oh and Choo-seok. Its literal meaning is ‘cold food ‘and falls on the 105th day welcoming the warm weather after the winter solstice (dongii), usually April 5th. Derived from ancient Chinese legends, Han-sik old custom is to not light a fire, therefore the consumption of food being cold, it is said to have been made to console Gaechache back in ancient China.

This holiday symbolizes the death of an important individual in Korean history and since this legend it  has become a custom to eat cold food on this holiday to commemorate his death, as well as the death of many other ancestors. Thus being a day of worship families gathers together to visit ancestor’s tombs and pay their respects, laying fresh turf (gaesacho) and planting trees around their graves. Though not commonly praticed nowadays but Han-sik is also celebrated by eating a wide variety of cold foods, consisting of mostly cold rice, a range of vegetables, seafood, soups and all sorted fermented dishes.

Special thanks to the KCC team for giving us the opportunity of a life time, meeting important leaders and being able to try such wonderful foods made by wonderful Master chef Tony Yoo.

VOLUME UP Concept Photos + Information on genres, themes and styles in the album