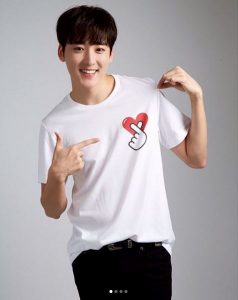 Love More consists of t-shirts and hoodies designed to promote positive influence and love amidst the recent, tragic events that have transpired all over the world. On his official announcement on Instagram Kevin stated,

“Because of what’s happening in the world recently and all the hatred, I’ve been trying to think of how I can bring more love and positive influence. That’s why I came up with my slogan #LOVEMORE and the finger heart logo that represents #KOREA #KPOP and me.” – Kevin Woo 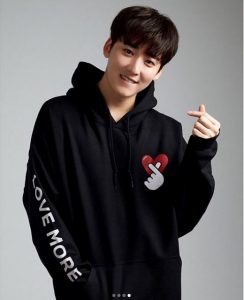 Kevin will officially be unveiling the clothing line on Saturday, August 19 at his Star Square event. Fans who wish to support Kevin and his cause can purchase the t-shirts and hoodies as early as 10AM at the merchandise booth in the lobby of the Los Angeles Convention Center. (Note: Star Square purchases and raffles will no longer be held at the Star Square booth. Only one item purchase per person.)

Can’t make it to KCON? The Love More line will be available to ship worldwide starting Monday, August 21.

Kevin Woo is a Korean-American singer, actor, and television host currently based in South Korea. He debuted as a member of K-Pop boy band U-KISS in 2008 and was the main vocalist in the group. Their breakthrough hit was “Man Man Ha Ni” released in 2009. U-KISS is known for their international popularity, where they have held various tours worldwide including Asia, Europe, North America, and Latin America. They made their official Japanese debut in 2011 and held numerous sold-out concert tours in Japan and topped the Oricon chart with multiple hits. Kevin is currently a host of popular music talk show After School Club on Arirang TV. After School Club is a live interactive talk show featuring musical guests of South Korea and is directed at an international audience. It allows fans of K-Pop music to interact directly with their favorite stars on the live show through social media. Kevin Woo was raised in Danville, California where he lived with his parents and elder sister. He is currently preparing for his solo career.