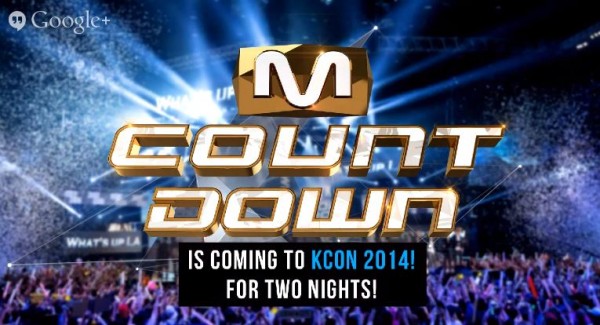 Prepare yourselves! KCON 2014 will now be a two day concert event!

Earlier today, KCON hosted its weekly live chat session to interact with KCON-goers.  There they revealed that Korea’s largest K-Pop chart show, M! Countdown, will be returning for a two-day concert!  Furthermore, each day’s concert will have two different line-ups! The first round line-ups will be revealed at next week’s KCON live chat. Last year’s KCON consisted of almost a dozen artists, all of whom performed on the second day for a two-and-a-half hour concert to end the Hallyu festivities.

Double the line-up! Double the fun! KCON 2014 will surely not disappoint!

Other announcements include the launching of the KCON Quest Contest! The contest is a sticker scavenger hunt that requires a person to check-in (Facebook/Foursquare/Yelp) at participating locations (CGV Cinemas, Tous Les Jours, and BiBiGo) and then show it to an employee at any of the participating stores to receive a stamp. Stamp flyers can be picked up at any of the participating locations.  Three more quests will be announced later on. The first ten who collect all six stamps will win free access to the KCON Red Carpet.  (Only open to CA residents.)