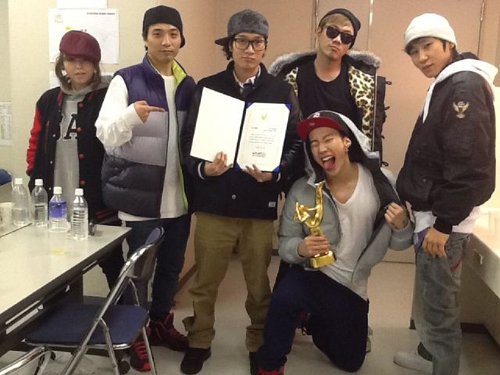 A recent picture of Jay Park, with a different look on his face has surfaced.

Jay Park won an award, on January 11, at the 26th Golden Disk Awards. The awards took place in Japan at the Osaka Kyocera Dome where Jay released a picture of himself with his backup dancers waiting in the green room with the award in his hand.

Jay Park uploaded the picture to his Twitter with his funny pose. He must have been delighted with his new award, fans greeted the picture with congratulatory messages.

But the picture has attracted more attention because of the look on Jay Park’s face rather than the award. The funny look at his face makes a massive change from the serious looks that Jay Park portraits in his usual pictures.

Fan responded to the picture with comments: “Congratulations on winning an award at the Golden Disk Awards!” “I’m so happy about the news!” “I love his hilarious look,” “Where did serious Jay Park go?” “I don’t know why, but that picture makes me so pleased.”

Jay Park proved himself and his popularity one again by winning at the Golden Disk Awards. Jay will be releasing a new album in February as well as starting promoting and performing.

T-ara rides the subway to thank their fans