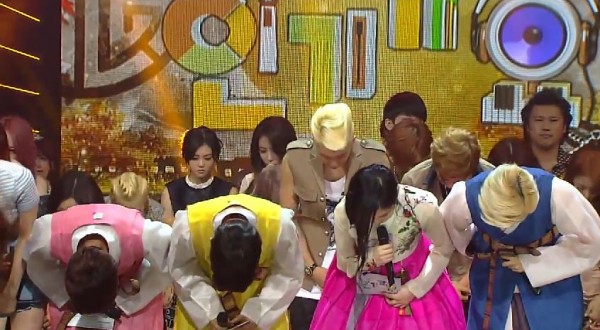 On September 7, only hours after Polaris Entertainment announced the passing of RiSe due to the tragic car accident that also claimed the life of fellow member EunB, Inkigayo paid their respect to Ladies’ Code by playing their song “I’m Fine Thank You” during Sistar’s encore stage.

Sistar’s track “I Swear” topped this week’s Inkigayo, beating out Super Junior’s “Mamacita” and Winner’s “Empty”.  The girls quickly thanked their fans and then proceeded to give their deep condolences to Ladies’ Code.  Instead of celebrating their win and performing, Sistar and the rest of the artists remained onstage with sorrowful expressions as they paid their respect and bowed while Ladies’ Code’s “I’m Fine Thank You” played in the background, closing off the show.

Following news of EunB’s death, “I’m Fine Thank You” soared to the top of numerous music charts as fans fulfilled the late EunB’s only wish – to have one of their songs earn the #1 spot on music charts.

Once again, we offer our deepest and heartfelt condolences to Ladies’ Code.