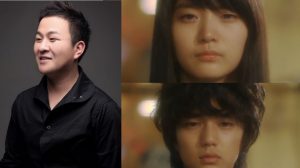 LOEN Entertainment today released the full MV for Huh Gak and LE of EXID’s ‘Whenever You Play That Song’. Click below to view it:

In the MV itself, Shinsadong Tiger stars as the driver of the taxi the female protagonist hails in the beginning. She is however lured away from the taxi by music from the nearby cafe. She wanders closer and has a flashback as she sheds a tear. The male protagonist is then seen hiding in an alleyway, and tears down wanted posters of himself. He is then chased by police, grabbing a coat hanging on a laundry line, and runs into the female protagonist as he hugs her as cover from his pursuers. After the police have cleared, he walks away, unaware of the girl’s reaching arm. The girl later then discovers the boy in a guitar shop, but conceals herself outside. This however is enough to grab the boy’s attention, and the pair visit a cafe, listening to music and end up falling in love. The girl eventually finds out that the boy is a wanted criminal but ignores this, until the police end up locating the boy. The couple attempt to escape, but the girl trips over and is held hostage by the police. Despite the girl’s desperate requests for the boy to run, he hesitates, and in doing so, allows the police to beat him on to the floor, provoking the tears of both the boy and the girl. The flashback then ends and the video returns to the present; one of the workers in the cafe moves to reveal the boy in the cafe, but not until after the girl has walked away from the cafe.

The MV was directed by Hong Won Ki, and the male protagonist is played by Yoo Seung Ho.

The MV has received comments such as “Seriously? She couldn’t have waited for﻿ another minute?” on YouTube, illustrating how suspenseful and astonishing the plot is.

What did you think of the song and the MV?