After the United Cube Concert in London on 5th December, blogs, Facebook and Twitter were filled with stories and pictures of B2ST, 4Minute and G.NA. All of the members of B2ST and 4Minute were tweeting about London and KiKwang even posted up a photo of them in front of Selfridges. 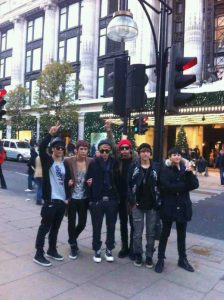 The Korean press were very excited that 4000 people came to cheer and support the artists from not only Britain but Sweden, Poland, Germany and Spain. They reported that a blonde fainted after seeing G.NA’s performance. The people in Korea were also shocked and very impressed.

It was just as exciting for us, the fans, to have them perform in London for the first time. But now that they have left, a lot of people are tweeting and posting on Facebook that they miss them. Except G.NA, there is a way to see them again. KBS Music Bank is taking place in Paris on 8th and 9th February!

From Cube Entertainment, 4Minute and B2ST will attend. Other groups that are coming to perform are SHINee, Girls’ Generation, 2PM, T-ARA, U-Kiss and Sistar. The tickets are around 70-100 euros and are available from various ticketing sites.

Huh Gak & LE: Whenever You Play That Song Full MV