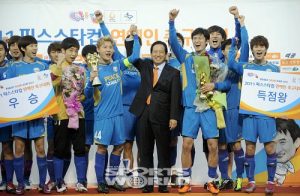 On October 19th, the FC Men faced off against the Miracle FC (led by comedian Kim Yong Man) at the Suwon World Cup Stadium. In the final round, the FC Men were able to turn the tables and come away with a final score of 4:3.

Junsu, B2ST‘s Doojoon and Kikwang, Park Sung Kwang, and many other teammates were applauded for showing skills on par with that of a professional soccer player. Junsu and Yoon Kyung Shik worked together to shoot a total of four goals for the team.

Doojoon was honored the position of ‘Man of the Year’ by the Samsung Bluewings for his outstanding performance.