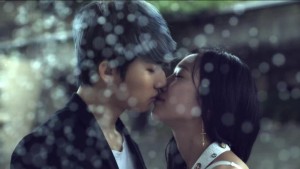 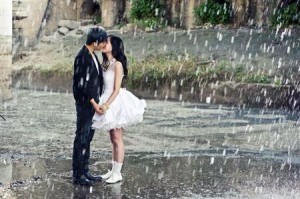 The smiling machine of Bigbang, Kang Daesung shot his very first on-screen kiss for his upcoming song’s MV to be released in Japan.

Earlier, in July 11, the short-version MV of his solo single “I Love You” was unveiled on BigBang’s Official Youtube Channel that gave us a glimpse the said kissing scene.

Daesung’s singing and acting prowess became prominent as he played as a lover of a sick girl who does not have that much time left. The characters spent their limited time together feeling smothered by pain for being so powerless over the situation.

“It was my very first kissing scene and I was too nervous to remember anything. In the music video, there is just one scene like this, but we had to film it many times for different camera angles. The use of high-speed cameras and the rain in the background made it a particularly beautiful scene.” He stated in an interview after filming the scene.

Daesung achieved a huge success as 100,000 fans from 20 different cities in Japan cheered for him in his first solo tour ‘D-Lite D’scover Tour 2013 in Japan’. Preceding this triumph, this coming 3oth of July, the track “I Love You” will be released and will be featured in a Japanese TV series as its main soundtrack. Collaborating with a well known violinist Taro Hakase made the music lovers and fans expect higher.

Watch the short-version of the MV and the making here: