BoA is amidst holding her first solo concert, called ‘Special Live 2013 Here I Am’. In congratulations of this, YG Entertainment’s CEO Yang Hyeonseok sent her a wreath, a common practice when showing an artist support at concerts. BoA took to Twitter to thank the CEO for his gift: 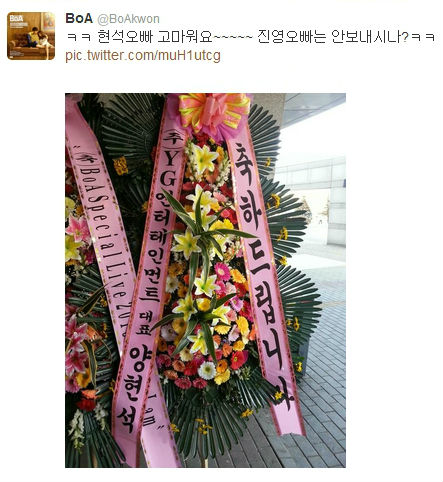 “ㅋㅋ Hyeonseok Oppa thank you~~~~~ Not a bit of Jinyoung Oppa? ㅋㅋ”

BoA seems to be joking about not seeing a wreath from JYP Entertainment’s CEO, Park Jinyoung, whilst receiving from the YG CEO. The three became close as they were judges for SBS’ ‘K-Pop Star’.

In other news, BoA is releasing a new single just for her solo concert, with the title ‘Disturbance’.