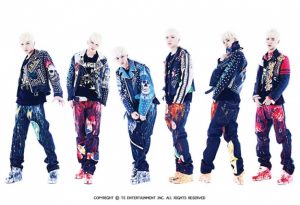 Since both boy bands received so much love with their song we thought we’d have a show down to see which one cames out on top.

The groups will be compared on 6 different elements of their song and MVs which are:
[ad#GA-468-tx-Minaz] 1) The swagger

Which group do you think has more swagger in their MV? B.A.P with their aggressive dance and lyrics or Block B with their trouble maker characters and impressive close-ups.

Both leaders – B.A.P’s Bang Yong Guk and Block B’s Zico- have a scene where they stomp in the video before their climax dance sequence. Which one do you think is more powerful and cool?

Both groups had very memorable dances in the video, B.A.P’s was aggressive and Block B’s was cool..which one do you think is more impressive in the MV?

B.A.P started out the music video wearing all black outfits and ended up wearing Punky jackets with studs and spray paint whereas Block B were wearing chic black clothes and inco-operated cool studded jackets and bling accerssories. Which one do you think was cooler?

This one is the biggie because this is the overall feel of the MV from the story to the background. Which concept do you like more?? B.A.P’s aggressive underground style (very similar to 2ne1) or Block B’s troublemaker rooftop dancing version?

Incase you haven’t watched the videos yet check them out below,

Vote for your favourite in the comments section below to crown the group with Song/MV of the month (MVOTM)!!

Junhyung to make his debut as a solo artist