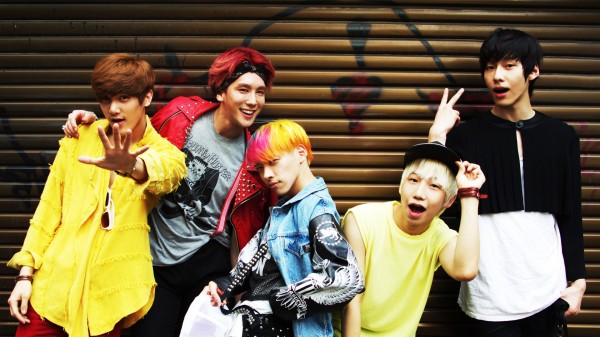 For those who may be unfamiliar with AA, pronounced Double A, are a male 5 member group made up of members Woosang, Aoora, Kimchi, Hoik and Juwon. They debuted on Music Bank in November 2011 with song “Because im crazy” and then released “Call” for their fans in December 2011. However these songs were only avaliable online, only a few lucky fans who attended a fan sign event managed to get hard copies. After a few months of promotions, AA went under hiatus, occasionally speaking to fans via twitter and their fan cafe. Although they promised to make a comeback a few times they hadn’t until now. AA are known for their quirky characters and independent work. (Member profiles here)

After a long wait, Double A fans are delighted the boys are officially coming back. After releasing a series of teaser pictures… (below)

AA then released a mashup clip MV for the fans (below) , similar to the one they did for their 2nd song ‘call’ for one of their new songs ‘Ageha Dance’ showing footage of the boys having fun and members Aoora, Woosang and Juwon performing with the groups good friend Daishi Dance in Japan (Kimchi and Hoik were unable to attend due to venue age restrictions).

Soon after that release, AA announced they will be cutting down the number of teaser videos from 20 to 15, but as a conciliation they will turn the teaser releases into a game for fans, if fans can guess which teaser has the title track song in, there will be prizes. So far there has been 8 teasers released with individual photos of the members on each. (below)

Which teaser is your favourite so far? Look out for more AA updates here.