Hello Hottest, it’s been a long time no see 2PM. 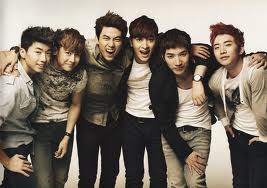 According JYP Ent, They are preparing for comeback this year. An exclusive report by Sports Korea, the specific month that the group seems to be aiming for is April. The boys have already decided on a title track, which is said to be an upbeat dance track reminiscent of their hit song “Hands Up”. It’s said the boys may be entering filming for the music video next month and make their return in the middle of April.

However, JYP Entertainment denied that 2PM have decided on April, commenting to Osen, “They are preparing for their comeback, but there are a lot of things they still need to do like fine tuning the schedule. Our goal is to have a comeback in the early half of the year.”

Another rep from the agency told Sports Seoul, “The rumors about 2PM’s comeback being set for April are not true as nothing has been decided yet… It’s true 2PM is currently working on selecting songs, but we haven’t yet decided on the title track or the specific time period of comeback.”