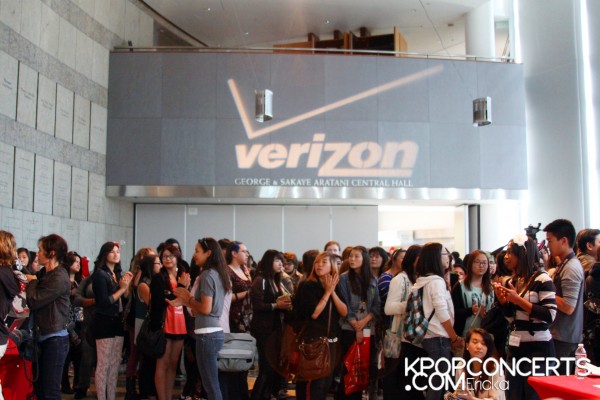 On May 7, 2013, B.A.P has officially kicked off their North American tour in Los Angeles, starting off with the Verizon-hosted special fan meet-up at the Japanese American National Museum.  Although it was “open” to the general public, the event was specifically for the Babyz who will not be able to attend the concert, but would still have the APAHM experience with fun-filled activities!

Typical of a K-Pop event, there was a long line of fans as early as noon, which wrapped around the museum as eager Babyz were all hyped up for the day’s activities. To get everyone even more excited, the organizers gave away concert tickets, cell phones, speakers, and autographed B.A.P albums.  The highlight was a chance to win a High-Touch (high-five) opportunity with B.A.P after the concert via scratchcards.  In order to receive these scratchcards, Babyz had to participate in variety of activities, such as:

Hosting the event was comedian and founder of Kollaboration, Paul “PK” Kim, who also hosted KCON back in October. PK expressed how pleasantly surprised he was of the increasing number of non-Asian fans attending K-Pop events and their interest in the Asian culture in general. Soon after that, Hollywood actor Jason Kyson (“Heroes“) popped up on stage and gave a quick shout out to the attendees as well, which made everyone present even more excited, screaming their heads off.

The three hour fun-filled and exciting event may be short, but enough to get the Babyz rekindle their common bond – that is, their love for B.A.P. Check out some of our photos of the event below,