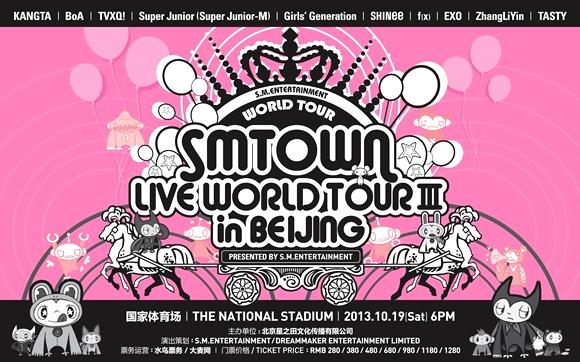 The biggest names from SM entertainment will be heading to Beijing in October for ‘SMTOWN LIVE WORLD TOUR III in BEIJING’.

SM Entertainment confirmed that the world tour will be held at the Bird Nest on October 19.

SMTOWN Live will be the fist overseas act to perform at the Bird Nest stadium, previously only the biggest Chinese stars such as Jackie Chan, Andy Lau, and Wang Li Hong has performed there.

This will be the third world tour for SMTOWN, the first being 5 years ago. Some of the cities to have been included in the line up previously were Seoul, LA Paris, New York Tokyo, and Shanghai.

Take a look at past performances:

FT Island releases movie clip for 'THANKS TO'

Ailee and Yiruma to Team Up For Next Single