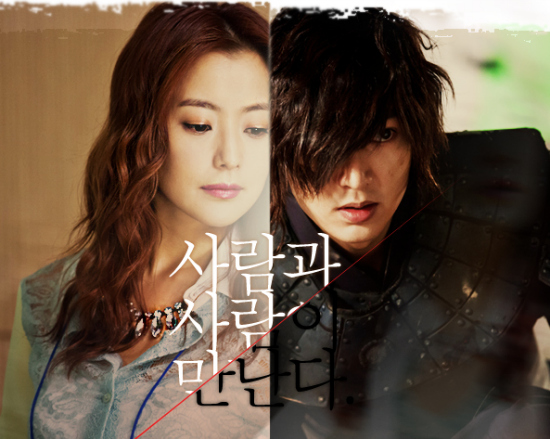 After 23 dramatic and exciting episodes SBS aired the last episode of their popular period drama ‘Faith’ on the 2nd of November and wow was it a good one!

For those of you who don’t know what ‘Faith’ is about, ‘Faith’ depicts the love between a warrior from the Goryeo Period and a female doctor from the present day, their love transcending time and space.

In my opinion this drama was probably one of the most gripping and entertaining dramas of fall 2012. The plot and story of the drama was fantastic and it kept your attention all the way through till the very last episode – it did get a little draggy around the 22-23 episode mark- but nonetheless with a finale that was full of drama and suspense it ended with a bang! Personally, I really enjoyed how the drama developed and how the secrets and mysteries unfolded themselves as we edged towards the finale. On the other hand, if you really want to uncover everything you will have to watch it to the very end because episode 24 is where it all happens!! I was holding my breath throughout the episode up to the very end – trying really hard not to give spoilers away-. The only disappointing  part in my opinion was right at the end were I was left wanting a little more at the closing scene – but I guess that’s always the case when your current favourite drama ends- The villains in this drama were…I don’t think as HATE worthy, as a lot of the time I was left confused by how confused they were about their intentions. Was it greed? Was it “I have nothing better to do so why not?” You find out in the finale. Characters  I found especially endearing throughout the drama were the Woodalchi warriors and their respect and admiration for their general. They were a source of a few laughs too!

Both the lead actors were absolutely fantastic and portrayed their love for each other in such a sincere and true fashion that we could almost feel it from across the screen.I t is heart-warming to see such on-screen chemistry because it helps in telling the story better. Unlike other dramas, this drama doesn’t have a distinct love triangle which means the story solely concentrated on the love that developed between the two lead characters – which was my favourite part and the part that brought tears to my eyes the most-. I think the subtlety of how the portrayed their love for each other was so beautiful. It teaches you how love can be pure and undeniable without having to be flamboyant and exaggerated and of course how it can transcend time and space.

Like the veteran actress she is, Kim Hee Seon stood out throughout the drama for the outstanding portrayal of her character, Yoo Eun Seo. From her tears to her laughter, she made her character loveable and endearing to the audience through her bright personality, which made me root for her all the way through. Lee Min Hoo again, showed his ever growing acting skills by holding his own against Kim Hee Seon and deservedly living up to his lead character role. For a young actor his portrayal of strength, leadership and matureness as the Woodalchi army general was so..masculine! I don’t know how else to describe it other than the fact that I was filled with a sense of utter admiration for him as his character unfolded throughout the drama. Especially his sword work, I never realised a man with a sword looked so attractive.

Overall, I think this drama is definitely worth watching if you are a fan of a good love story. It has a serious side to it, as expected in period dramas a lot of the time but it doesn’t disappoint as the love between the two would make any girl all mushy inside. It is a definite recommendation for those of you who like fantasy based romantic dramas. Like I said in my first impressions review Here even though it follows the very popular time travel theme, it definitely stands out to me as one of the best.

IU's first appearance after the scandal