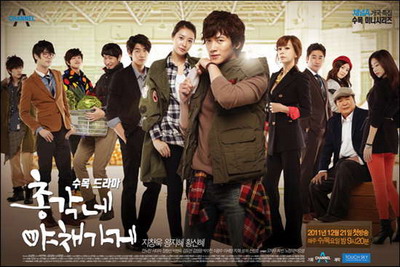 “Bachelor’s Vegetable Store” is based on the true story of Lee Young Suk who started selling vegetable at a small store in 1998 and now owns 33 vegetable stores nationwide. A book was published in 2003, and now the story takes to the screen- Hancinema

The drama tells the story of Han Tae yang (Ji Chang Wook) and Ji Shim (Wang Ji Hye) two orphans and best friends who get separated at a young age through a series of dramatic events.

Surprisingly this drama did not receive as much publicity as it should. I was first recommended this drama by my best friend who is also a drama addict..and well ever since ep 1 I have been totally hooked!

So far a total of 8 episodes have aired, which is usually the half way point in Korean Dramas..and so far so good! The dramatic events in the first couple of episodes leave you totally gripped..from the story to the acting it was all just too good! I was in absolute tears at some points!

The Romance part of the drama hasn’t developed very much yet but without giving anything away..you are starting to see glimpses of a romance. The characters in the drama especially Han Tae Yang’s character is so full of motivation and determination that it makes you smile. Other characters ( like the mother) totally fill you up with rage. The varied emotions- in my opinion- is a sign of a good well acted drama!

I would definitely recommend this drama if you are looking for something new to watch- it looks very promising. I will wait till the end of the drama to be able to give a full and accurate review of the drama so please stay tuned!

If you do watch the drama, don’t forget to leave a comment and let us know what you think.

Teen Top C.A.P criticised by fans after claims he would 'beat' his future daughter